Ruling a setback to Isro and govt, although penalty is far short of $1.6 billion Devas had sought in damages

The ruling is a setback to Isro and the government, although the penalty is far short of the $1.6 billion Devas had sought in damages, calculated to include the value of its business, interest and costs, in the arbitration proceedings it initiated against Antrix Corporation Ltd, the commercial arm of Isro.

“Devas Multimedia and its shareholders, including highly regarded international investors, are pleased that the ICC Tribunal unanimously ruled in its favor and found that Antrix is liable for unlawfully terminating the Devas-Antrix Agreement in February 2011," Devas said in a statement.

“Devas is hopeful that Antrix will now live up to its legal obligations and pay the award so that this dispute that arose during the prior government can be brought to a swift close."

The ruling by the International Court of Arbitration of the International Chamber of Commerce (ICC) relates to a 28 January 2005 agreement between Devas and Antrix, under which Devas was to lease as much as 70 megahertz (Mhz) of S-band spectrum from two satellites that were to be launched by Isro.

As part of the deal, Devas was to pay Antrix around $300 million for the right to use the spectrum for 12 years, extendable by an additional 12 years. Devas intended to use the spectrum to provide audio, video and broadband services using a mix of satellite and terrestrial technology.

Antrix, on its part, argued that the damages were limited by contract to $15 million in fees that Devas had paid to Antrix.

Interestingly, the two organizations did work together to build and test the satellites in the five years between signing the contract and its eventual annulment.

The Cabinet Committee on Security called off the deal in 2011 after questions arose on whether the procedure followed by Antrix to allocate the airwaves was the most economically favourable possible for the exchequer. 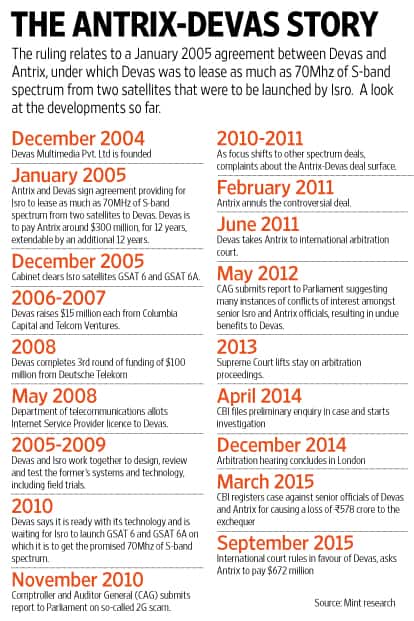 The committee scrapped the deal on the grounds that it was not in the security interests of the country.

The ruling will now have to be enforced by a court in India. For this purpose, a case has been registered in the Delhi high court and is expected to be listed for hearing on Wednesday.

The scrapping of the deal was seen as a fallout of the November 2010 report by the Comptroller and Auditor General of India that fuelled what is now commonly referred to as the 2G spectrum scam. The report alleged that a flawed 2G spectrum allocation process followed by the then United Progressive Alliance (UPA) government had led to a ₹ 1.76 trillion loss (in notional terms) to the exchequer.

New Delhi-based space expert Ajay Lele said he was not surprised by the decision of the international tribunal. He said the then UPA government hurriedly cancelled the deal as it was under pressure over issues related to coal and spectrum allocations. This, too, was tagged as a potential scam.

“The issues of terrestrial spectrum and space spectrum were misunderstood and based on limited information; the decision was taken to cancel the deal and scientists of the calibre of Madhavan Nair were blamed unnecessarily," Lele said, “It was obvious India stood no chance in the court."

“We hope that the dispute, which arose more than four years ago during the previous administration, can now be finally closed," Ram Viswanathan, president and CEO of Devas, said.

In March, The Hindu reported that the Central Bureau of Investigation (CBI) had registered a case against Devas Multimedia, a former official at Antrix Corporation and others in connection with the 2005 deal. On 17 September, The Asian Age reported that CBI, in connection with its investigation, had sent judicial requests to Mauritius and Singapore to get details about three firms based there.

In April, The Indian Express reported that the Enforcement Directorate was set to pursue a Prevention of Money Laundering Act case against Devas Multimedia and had written to CBI for details of the case it had registered.

Mint could not ascertain the status of these investigations.