John Perry Barlow | Giving your expression away makes it valuable

John Perry Barlow | Giving your expression away makes it valuable

John Perry Barlow, 67, started out being a cattle rancher and then became a lyricist for American rock band Grateful Dead. Barlow also took up the fight for cyber liberty and joined politics. He has now come a full circle with his experiments as he visits India to explore and share new and economical methods to produce biofuels.

Barlow, who was in Bangalore to collaborate with an energy company, spoke about his various ventures, Internet freedom and his relationship with the Grateful Dead in an interview. Edited excerpts:

What brings you to India?

I, along with my partners, have developed two very promising new ways of creating biofuel and want to promote their use in new and developing areas. One of them is based on algae and we have methods through which we can grow more and use that to create fuel inexpensively.

You have consistently fought for cyber liberty and free content. Did this emerge during your days with the Grateful Dead? 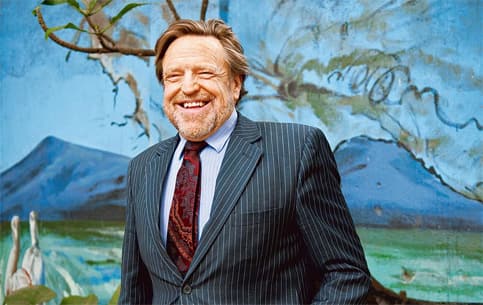 Role change : Barlow says he, along with his partners, has developed two very promising new ways of creating bio-fuel and wants to promote their use in new and developing areas. Photo Aniruddha Chowdhury/Mint

You came into the domain quite early with the Whole Earth ‘Lectronic Link (WELL, an online community).

It was very influential and very early in the time of Internet. At a time when anybody on the Internet was a geek, WELL was the first zone of discussion that created an opportunity for discourse. It attracted intellectuals and also offered continuity to the community of Deadheads, who could communicate always and not just at concerts. It gave them the chance to be at home all the time. It was the founding zone for a lot of notions of culture of the Internet that has now become a global notion. And that’s how EFF (Electronic Frontier Foundation) got started.

I will always be very proud of what the Electronic Frontier Foundation has achieved. It was the nation-state vs cyberspace, and considering that we were at that point taking on the industrial era and all the associated power relations that came with it, we had great success in keeping the Internet as a free zone when compared to how I first encountered it in 1985.

What about the Declaration of the Independence of Cyberspace?

I was drinking. It was at the end of the World Economic Forum in 1996. The people at the forum were dimly aware of the existence of the Internet, and those that were wanted to crack down on it, because to them it meant the distribution of pornography and terrorism and what not. The US was signing into law that EFF later eliminated by filing a petition with the Supreme Court; it was the Communications Decency Act meant for the protection of children that prevented the use of certain words on the Internet. Those two things really got me irritated. I was dancing at the closing of the forum and thought about the arrogance of the physical world towards the virtual world. So the Declaration of Independence of Cyberspace was written between dances and drinks.

What do you think of India’s Internet laws?

I don’t presume to know enough about what’s going on in India. Of the few that I have heard of, I’d say, I would love to see them enforce some of them; they might in some very arbitrary fashion. But everybody should realize that there isn’t a point in trying to suppress the fundamental human tendency to share knowledge.

Tell us the Grateful Dead story.

(Robert) Hunter had been writing with (Jerry) Garcia and continued to do so until he (Garcia) died. Bob Weir, who is my best friend, started to write songs with Hunter. He and Hunter could not get along. At one point, they were working together and I happened to be there and Hunter said to me, ‘Why don’t you write songs for him? You at least like him,’ and I said, ‘I am not sure I know how to write them,’ and he said, ‘I’ve read your poetry,’ and so I said, ‘But it’s not the same,’ and he said, ‘You’ll probably figure it out,’ so I said, ‘What the hell.’ So I did. That was 1970. I have to confess I didn’t write any of my favourite Grateful Dead songs. I always preferred Hunter’s work. I was there to add another voice. I kept it more diverse.

What did you think he had that you didn’t?

Which songs of yours are you proud of?

Cassidy was a pretty good song. Brent Mydland and I wrote a lullaby called I will take you home to our daughters and ironically it was about being there for them for ever, and he passed (away) shortly after we wrote it. The song was in the last actual Dead record.

And your favourite Grateful Dead songs?

My favourite Dead song is Stella Blue. It is a phenomenally moving piece with a hugely enviable performance. It makes me angry every time I hear it.

Any time when a song was not delivered the way you intended?

Has there ever been a time when it is delivered the way I wanted? Weir has a unique understanding of phrases. I’d write to the beat and he’d sing it otherwise. I was always frustrated. Sometimes I think that I will record another record, just to let people know how I meant for it to be. Had it just been up to me, it would have been more straightforward and not so interesting. Hunter was a stickler and Weir was stubborn and headstrong and had many crazy ideas.

And they were not straightforward.

That was intentional. Fairly early on, we realized there was a quality to the Deadheads; like a cult, they had characteristics that turned towards religion and neither of us was keen on dogma. So we agreed that it was important that we keep the words devoid of dogma for them. We intentionally made some songs widely open to interpretation and never told them what we were thinking about. The Grateful Dead experience was like the Internet, it was a conversation between the audience and the band. The audience was part of their creative process.

What was your most enduring memory of Garcia?

We were really close friends. The last time I ever saw him, we were staying at the Four Seasons in New York and I was at Central Park teaching Weir how to rollerblade and Garcia was standing by the doorway. He looked completely white. He looked supernatural. He saw us and said, ‘You guys are going to get killed doing that and I won’t come to your funeral,’ and I said, ‘Well I’ll come to yours,’ and he said, ‘If you are lucky.’ This was a month before he passed.

And after that there was confusion about the distribution of songs by the band?

He (Garcia) hadn’t been married long to Deborah (Koons), but she was his wife. She was certainly not of our culture and had dictatorial leverage. My chief concern was his family, his daughters, and they were all being shut out. Garcia’s death also didn’t bring the rest of the band any closer. Grateful Dead was a little like Yugoslavia. As long as there was (Josip Broz) Tito, like we had Garcia, it was ok. A lot of the resentment that was there came out. People had been chewing their tongues until then and his absence created a lot of friction.