London: Barclays posted a 22% rise in first-quarter profit, ahead of market forecasts, as a strong rebound in revenue from its investment banking arm and a drop in bad debt countered increased compensation for insurance mis-selling.

The British bank reported an adjusted pretax profit of 2.45 billion pounds ($3.94 billion) in the three months to end-March, up from 2 billion a year ago and above the average forecast of 2 billion pounds from a poll of analysts supplied by the company. 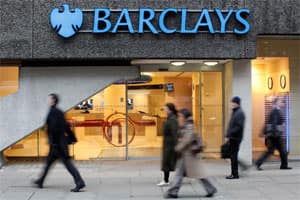 However, Barclays made a statutory pretax loss of 475 million pounds, compared with a 1.655 billion profit the year before, including a 2.6 billion pound accounting loss on the value of its own debt and an extra 300 million pound charge to cover for mis-selling of payment protection insurance (PPI).

Losses on bad debts dipped to 778 million pounds in the first quarter, down 16% on a year ago.

Top-line income at Barclays Capital, the investment bank business that provides the bulk of the bank’s profit, rose to 3.46 billion pounds, up 3% from a year ago. That marked a 91% jump from the weak fourth quarter of 2011 and was above the consensus forecast of 3.36 billion pounds.

BarCap, along with other investment banks, endured a miserable end to 2011 when a slump in bond trading income due to the euro zone sovereign debt crisis led to its worst quarter for three years. That same year banks were hit by tougher regulations.

Barclays said its adjusted return on average shareholders’ equity had risen to 12.2% in the first quarter, from 10.2% in the same quarter the year before.

“Our rock solid capital, funding and liquidity positions remain a source of competitive advantage and enabled us to fund a substantial proportion of our 2012 term funding requirements he said.

In February, it pushed back a return on equity target of 13%.

Oriel Securities reiterated its ‘buy´ recommendation and 285 pence price target on the stock.

“The current and forecast profitability should be seen in the context of a strongly capitalised, conservatively funded and very liquid balance sheet," said Oriel analyst Mike Trippitt.

German rival Deutsche Bank on Thursday reported a first-quarter pretax profit that was below forecasts hit by weaker-than-expected market activity which hurt trading and asset management.