What’s in a name? That which we call a vegetable by any other name would taste just as good", wrote William Shakespeare in his play ‘‘Musings of the Tomato Fruit". Okay, perhaps I’m remembering it wrong, but there is incredible variety in the vegetable land, a large group of food that includes the edible parts of a plant—stems, roots, flowers and leaves—and also things such as beans, peppers, tomatoes, cucumbers, chillies and eggplants that are technically fruit (because they contain the seeds), but are nevertheless considered vegetables in lay person’s terms. 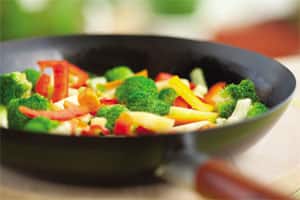 If you want veggies to stay bright and colourful, add the acid component of your recipes towards the end. iStockphoto

Unlike meat (which my last column covered), vegetables are largely water, fibre, vitamins and minerals. While meat is mostly protein, vegetables are mostly carbohydrates. And despite what some fad diets might tell you, all carbohydrates are not bad. More than 90% of a vegetable is water. When you cook leafy vegetables such as spinach, for instance, the drastic drop in volume is from collapsing cell walls that release water, which then boils off. 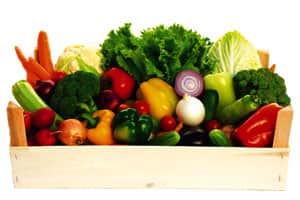 To get the best of both in terms of flavour, lightly sauté the vegetables before adding the cooking liquid. iStockphoto

Boiling and steaming: Both methods are great if you want vegetables with no fat, and with very little flavour apart from their own. To boil vegetables, use a 3% salt solution. This will prevent the salt and sugars from the vegetables leeching out. It will also speed up the cooking. The moment they’re tender enough, remove from the heat, drain, and serve immediately, or dunk them into iced water to prevent it cooking any further. Steaming is even better because you don’t have to heat a large pot of water, and the vegetable flavour is preserved completely. I have often tossed vegetables in a flavourful mix of herbs and spices, and steamed them for customers with serious heart problems and on special fat-free diets. The results are brilliant. Just be careful that you spread out the vegetables in your steaming tray so that the steam reaches everywhere and they cook evenly.

Sautéing and stir-frying: Both these methods expose vegetables to dry heat with a layer of oil, the difference being the temperature and duration. Sautéing is done at a medium-high temperature for longer, while stir-frying (a popular Chinese cooking method) is done over very high heat for just a couple of minutes, with the vegetables cut into smaller pieces for quick cooking. Both involve stirring the food around in the pan constantly. Moisture gets removed from the vegetables, concentrating their flavour. The exposure of heat to vegetables also creates browning and the forming of new flavour compounds that add to the taste of a dish. Lastly, some flavour compounds in the vegetables mix with fat better than water and this allows your dish’s flavours to taste more ‘‘together".

Stewing and braising: These wet-cooking methods are common in Indian cooking, in numerous curries and sabzis. As I said earlier, take care not to overcook your vegetables, and if using vegetables with different cooking times (say potato and cauliflower in aloo gobhi), cook the longer-cooking vegetable (potato) for a while before you add the quicker-cooking one. To get the best of both in terms of flavour, lightly sauté the vegetables before adding the cooking liquid. This will give you the additional flavour from sautéing as explained above.

Grilling: Grilling is a great way to enjoy vegetables. In fact, one of my favourite ways to have veggies is to grill them with just some salt (perhaps some herbs such as rosemary or thyme) and brush some extra-virgin olive oil on them once they’re done. Since grilling is a detailed topic, a future column will be devoted just to this. Just remember to cut your veggies thin and don’t put them on the hottest part of the grill or they’ll burn fast.

Finally, a few words about picking vegetables and storing them. Vegetables are essentially part of a nutrient transport system of plants, and they start deteriorating the moment they are picked. This is why they must be bought and cooked as fresh as possible. By the time you see them in supermarkets, they’ve probably been sitting around for a while. Ignore limp, discoloured specimens as they probably have very little flavour left in them. Refrigeration slows down bacteria and other microbes from spoiling the vegetables, but there are exceptions to this. Tropical vegetables such as tomatoes, cucumbers, ginger, potatoes and onions are better off at room temperature. And remember that bacteria spread very fast. If you see a vegetable starting to go bad, immediately get rid of it. The adage about a rotten apple spoiling the bunch is literally true.

Madhu Menon is a chef, restaurant consultant and food writer. Respond to this column at indulge@livemint.com