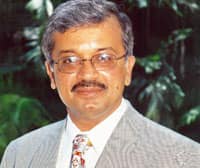 “When there is a slowdown and technology-spend is going down, at some level it reflects on the R&D also," S. Janakiraman, president and chief executive officer of R&D services at MindTree Ltd, said.

“So there will be some slowdown in growth rate temporarily based on the global market dynamics." The deferring of spends on R&D has been happening for the last six months, he added.

In the automotive electronics segment, there was increasing pressure on R&D costs, he said, adding that spend on R&D which used to be 8-10% of revenue was now about 4-5%.

MindTree, which offers IT and R&D services, gets about 22% of its revenues from R&D services. In the April-June quarter, its R&D service revenue rose nearly 31% on year.

Customers are not making long term commitments. Single projects are being split into phases. Clients are preferring to adopt an outcome-based pricing model, he added.

Although, revenue in the first and the second quarter of the current financial year didn’t suffer because of developments overseas, the order pipeline is lower, Janakiraman said. “But the visibility level we used to have last year at the same time for future quarters, I can’t say it is at the same level. It should be lesser, orders are achieving closure at the last minute," said Janakiraman, attributing it to lesser spending by large companies in the US and Europe.

“But we are seeing a lot more interest from mid-size and small companies in terms of leveraging India to control their costs," he said.

Growth in accounts have nearly halved. “So we need to compensate by adding more customers. Growth is happening but not at the same level as in the past, because they are tightening their budgets," he added.

However, MindTree’s May acquisition of Aztecsoft Ltd will keep its R&D service revenue growth buoyant in the current financial year, with its share of income nearly doubling, he added.

“One thing which is going to accelerate our overall R&D-related activity is Aztecsoft," said Janakiraman.