Funding rally, though encouraging, doesn't necessarily indicate that the ongoing downturn in the local venture capital market has come to an end

Mumbai: When India’s venture capitalists ring in the holiday season this year, their mood will be more upbeat than it has been for the past couple of years.

In the nine months ended September, venture capital-backed firms, a universe that encompasses seed stage start-ups, unicorns (start-ups valued at a billion dollars or more) and everything in between, mopped up a record $9.6 billion in fresh capital.

That’s more than double the capital raised in the same period last year, and nearly level with the $10.5 billion raised in all of 2015, a peak year in terms of funding activity.

At a global level, the pace of investments has been more moderate. Investors put $127.7 billion to work across 7,552 deals this year, against $114.8 billion across 8,792 deals in the same period last year, according to data by London-based researcher Preqin.

China, India and South-East Asia, the three largest venture capital markets in Asia, together accounted for 42% or $53.8 billion of the total capital deployed during the nine months under review.

The three markets continue to grow their share of the global investment pie year-on-year. 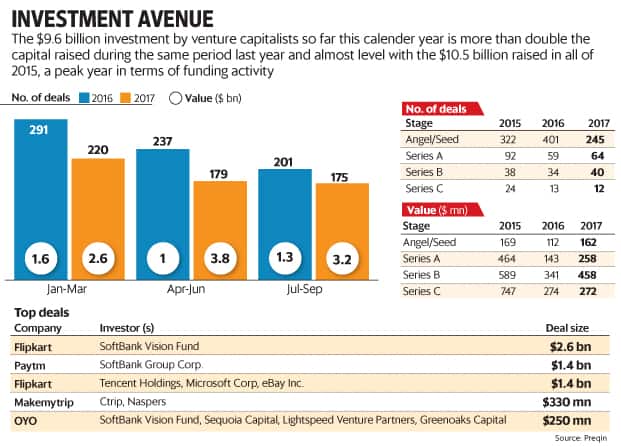 While China unsurprisingly accounts for the lion’s share of investments, India’s share stood at 7.5% of the global pie for the nine months ended September.

The funding rally in India, though encouraging, doesn’t necessarily indicate that the ongoing downturn in the local venture capital market has come to an end.

To begin with, fewer companies got funded this year. The $9.6 billion was distributed across just 574 deals, against the $3.9 billion spread across 729 deals in the same period last year.

Bengaluru-based company Flipkart alone snagged 41% of the total capital deployed. Importantly, a single factor has propped up investments during the nine months under review—SoftBank Group Corp.

The Japanese telecom and internet conglomerate alone accounts for 41% of the total capital deployed.

Masayoshi Son-led SoftBank kicked off its latest investment blitzkrieg here in May, with a $1.4 billion infusion in payments platform Paytm (One97 Communications Pvt. Ltd).

The aggressive investment run continues into the current quarter.

While Flipkart and Paytm are fresh bets, OYO and Ola are return investments for the Japanese corporation.

Taking into account the $4 billion-plus invested this year, SoftBank’s total investments here now stand at well over $6 billion, making it the single most influential player in India’s venture capital market. That comes with its upsides and downsides.

The good news is, money is no constraint for firms that catch SoftBank’s fancy.

Apart from its own considerable proprietary resources, it now has a war chest of nearly $100 billion to deploy, courtesy the Vision Fund—a global investment vehicle that raised capital from multiple third-party investors earlier this year.

At the current pace of investments, SoftBank’s investments here will easily hit the $10 billion investment target set by Son, Softbank’s founder and CEO, over a 10-year period, well before schedule.

The Paytm, Flipkart and Ola deals also bring billion dollar deal ticket sizes back into the market after a prolonged drought that nearly crippled some of those companies.

Most important, SoftBank’s big wagers, in the midst of a downturn, could encourage other global strategic investors, maybe even some financial investors, to put money on the table in due course.

However, it is going to be a while before the flood of global investors, who drove the investing frenzy two years ago, return to this market.

Hedge funds have barely registered a presence in the recent funding rally.

The inflated valuations they paid to buy assets during the last rally have since plummeted, and it will take some doing to recover that money. Strategic investors, other than SoftBank, have mostly remained on the sidelines, probably awaiting a further softening of valuations.

Also, unlike SoftBank, which is seen as more of a quasi-strategic investor, most strategic investors tend to take a measured approach to third-party investments and usually look for a business fit.

As the only investor with nearly inexhaustible resources and the will to spend, SoftBank now has the power to dictate the fortunes of some of India’s most valuable start-ups.

Paytm, Flipkart and Ola command the highest valuations in their respective market segments.

Most of OYO’s rivals have shuttered operations over the past 12-18 months and the firm is tipped to enter the unicorn club soon.

Not just that, the fortunes of venture capital investors who hold stakes in these firms or in firms that compete with SoftBank’s portfolio, are equally tied to SoftBank’s next moves.

In betting big in the midst of a downturn when valuations are under pressure, SoftBank is making a bid to correct the past wrongs.

When it entered this market in late 2014, it put $2 billion to work at peak valuations in five companies, including Delhi-based e-commerce marketplace Snapdeal (Jasper Infotech Pvt. Ltd) and property search platform Housing (Locon Solutions Pvt. Ltd). Snapdeal imploded this February. Housing was merged with rival PropTiger in January in a stock-swap deal.

Early stage is on road to recovery

SoftBank’s singular focus on cornering stakes in market leaders, as well as the absence of a large enough base of deep-pocketed investors, leaves firms in the market to raise later stage capital at the Series C stages and upwards, somewhat orphaned.

By most accounts, despite the funding rally over the last nine months, many more venture capital-backed firms will find their way into the graveyard before the ongoing downturn has run its course. That implies more write-offs for VC investors before they can return to the market with fresh investments in full form.

That said, investments in the early-stage market—seed to Series C—haven’t fared as poorly as they did last year when the downturn was at its worst. Investors put $1.1 billion to work across 361 deals in the nine months ended September, up 26.4% from the $870 million across 507 deals in the same period last year.

The decline in the number of deals indicates a flight to quality among investors. The recovery is particularly visible in the seed, Series A and Series B stages. Investments at the Series A stage were up 73.4% at $248 million against $143 million in the same period last year. Series B investments grew 34.3% to $458 million against $341 million last year. Seed and angel investments, which slumped to $112 million last year are nearly back to the 2015 levels at $162 million.

The uptrend in investments at the early stage can partly be attributed to venture capitalists seeking out younger startups in sectors that don’t necessarily demand big investment ticket sizes at the moment.

Over the past 12-18 months, investors have started to look at start-ups building products and services in areas such as IoT (internet of things), artificial intelligence and life-sciences. Another important factor is that the past 12-18 months have seen the entry of several new home-grown venture capital firms in the market.

Firms such Bengaluru-based Stellaris Venture Partners, Delhi-based Pravega Ventures, Hyderabad-based Endiya Partners and Mumbai-based Unicorn India Ventures are among the new one that have ushered in a fresh wave of early-stage investments.

It will, by most accounts, be several more quarters before the downturn in the venture capital market begins to ease. However, the road to recovery, at least for early-stage startups, is finally becoming visible.