New Delhi: Supply of mall space dropped by a staggering 54% in 2008 as retailers delayed expansion due to an economic slowdown, leading developers to withhold projects, a study has revealed.

As much as 11 million sq. ft of mall space that was supposed to have come up in 2008 has been deferred as demand from retailers declined, the report by real estate consultancy Cushman and Wakefield, or C&W, said.

“With an apparent softening of demand, mall supply in major Indian cities witnessed significant setbacks," C&W said in a statement. 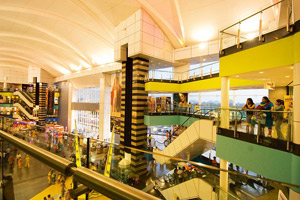 Saving grace: A file picture of CrossRiver Mall in New Delhi. New Delhi and its suburbs of Gurgaon and Noida, among other cities, have salvaged the situation with almost 67% of the proposed malls completed. Ramesh Pathania / Mint

“Of the proposed 74 malls at the beginning of Q1 2008, only about 34 were delivered through the year," the firm said.

India’s southern cities that have adopted modern retail much earlier than the rest of the country are among the locations that have seen the least supply of mall space last year, with Hyderabad reporting just 10%, Chennai 22% and Bangalore 27% of the space completed.

New Delhi and its suburbs of Gurgaon and Noida, among other cities, have salvaged the situation with almost 67% of the proposed malls completed even as the national capital region saw the highest vacant mall space, the study said. The New Delhi region reported 24% vacant space, followed by Pune with 15%.

Retailers settling for traditional streets rather than many of the poorly developed malls have aggravated the vacancy, the agency said. The national average of vacant space was about 16% due to the uneven distribution in various cities.

Companies such as Reliance Industries Ltd, which launched a $6 billion (Rs29,220 crore) retail venture in late 2006, with plans to open thousands of stores over the years, has shelved expansion in recent months to focus on making stores losing money, among some 800 it has already opened, profitable.

In recent years, realtors aggressively launched hundreds of malls, buoyed by the spread of branded store chains that promised to change the way Indians shop.

The mall culture and organized retail are relatively new phenomena in a country where consumers have traditionally been shopping at the country’s millions of ubiquitous mom-and-pop stores.

Contracting demand for mall space in recent months, meanwhile, has led to a decline in retail rentals—for the first time in years.

Rentals have declined between 10% and 15% across India, according to Shubhranshu Pani, president of retail services at real estate consultancy Jones Lang LaSalle Meghraj.

Tuesday’s Cushman study says rentals are further expected to drop in the first two quarters of 2009.