Mumbai: Tata Power Co. Ltd’s deal to acquire renewable energy business of Welspun Enterprise Ltd at an enterprise value of $1.4 billion has put the spotlight back on consolidation in the green energy space—a process some analysts say still has momentum left.

Tata Power, a Tata group company, said in a statement on Monday it had inked an agreement to buy Welspun Renewables Energy Pvt. Ltd for ₹ 9,249 crore ($1.4 billion).

Under the deal, Tata Power’s green energy unit—Tata Power Renewable Energy Ltd (TPREL) —signed an agreement to acquire Welspun Renewables Energy’s 1,140 megawatts (MW) of solar and wind power assets across eight states in India. Of this, about 990 MW is in solar power projects and about 150 MW in wind projects.

The transaction, which marks one of the biggest M&A (merger and acquisition) deals in India’s renewable energy space till date, will expand TPREL’s clean energy portfolio to 2.3 gigawatts (GW).

“The interest of strategic players to acquire assets is definitely on the rise, which is seen in the Tata Power-Welspun deal," said Ajay Saraf, executive director at ICICI Securities Ltd. 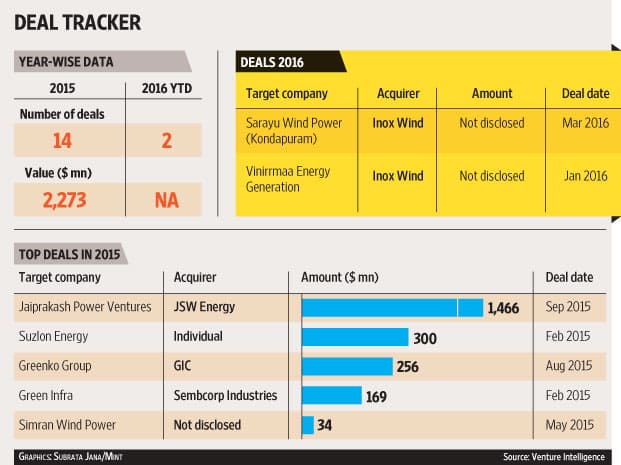 According to Kameswara Rao, partner at PricewaterhouseCoopers Pvt. Ltd (PwC), there is a healthy pipeline of M&A deals in the renewable energy sector.

“At least four to five significant opportunities are in the market—from companies that built in earlier waves of renewable energy development," said Rao.

In April, Reuters reported that Adani Group was in talks to buy the local assets of US-based SunEdison Inc. In the same month, Reuters also reported that SunEdison might sell minority stakes in its Indian solar projects to Finland’s Fortum OYJ.

“Companies pursue M&A route to scale up, especially in renewable energy, due to the long time scale required for pre-development work, such as in wind, or the uncertainties of competitive bidding in solar. The competition is stiff, and with solar bids routinely attracting 60-70 bidders, M&A guarantees scaling-up in a manner that green-field development cannot," said Rao.

In addition, there is deal flow from early-stage developers who sell semi-developed project sites, and from tax investors for whom renewable energy assets are non-core and were always intended for divestment, he added.

The M&A activity in the renewable energy sector, especially in the solar sector, are also being driven by highly competitive bidding for projects, leading to lower economic returns.

Companies feel that they are better off acquiring assets with better economic fundamentals than to participate in aggressive bidding rounds, experts say.

“Some of the Indian groups felt that tariff levels were aggressive and may not give them the returns that they seek. Despite all the positives around the sector, the aggressive level of bidding is actually scaring away some people from bidding," said Rahul Mody, managing director at Ambit Corporate Finance Pvt. Ltd.

While acquisitions help companies in bulking up their capacities, they also help them by lowering the pressure to bid at highly competitive rates, making the acquisition route very attractive. “They can let the tariff stabilise and then bid. It’s a better way to build capacity in the short term," Mody said.

The latest deal, which would place TPREL among the top renewable energy companies in India, will not necessarily result in the company dominating the sector, experts said.

At the climate change talks held in Paris in October 2015, India announced that it will be targeting production of 40% of its electricity through renewable energy sources by the year 2030, which translates to around 320 GW. The government has also announced its intention to set up 100 GW of solar and 60 GW of wind energy generation capacity by 2022.

Given the size of the opportunity offered by the Indian market, the trend towards the M&A route is likely to be a short-lived one, said Mody of Ambit.

For the time being, though, there will be a continued interest in M&A as there is a strong long-term potential for the sector, Mody added.