Mumbai: As the country’s economy soared—by at least 9% in the past three years— Indian companies and executives took to the skies, literally.

Plane makers sought to feed the frenzy. Even in small towns such as Bellary in Karnataka, where entrepreneurs suddenly found themselves rich on the back of a boom in the iron ore business, the executive jet (or turboprop) replaced the Mercedes S-class as the status symbol of choice. 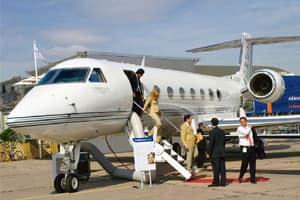 Now, with the economy slowing—the International Monetary Fund’s estimate for India’s growth in calendar year 2009 is 5.1%—companies, entrepreneurs and the plane makers themselves have been brought back to earth.

Fewer business jets will be bought in the country as a result, and plane makers will fall significantly short of earlier sales estimates.

Worse still, some companies are pulling back orders or selling planes they own.

Reliance Industries Ltd, DLF Ltd and Sterlite Industries (India) Ltd are among the firms selling or pulling back orders, people in the aircraft business say. Meanwhile, demand for jets in India—dubbed the second important market after China by plane makers—will halve this year as businesses in areas such as financial services, real estate, automobiles and petrochemicals take measures to cut costs and buffer themselves from eroding profits.

Reliance denied it is selling any planes; a senior executive at Sterlite confirmed the development; and a DLF spokesperson said the company’s decision to not go ahead with an order is not because of the slowdown.

The slowdown is evident in the jet charter and so-called fractional jet ownership businesses too.

Bangalore-based Jupiter Aviation and Logistics Pvt. Ltd, which in February 2007 had announced it would soon start offering fractional ownership of planes, is yet to start operations. A senior executive with Jupiter, who did not want to be named, said his firm would shortly launch its business.

Indian skies count 166 private jets—including multi-engine fixed wings and turboprops—and 193 helicopters, according to Business Aviation Association for India, or Baai, an industry lobby that recently was recognized by the ministry of civil aviation.

Makers of commercial passenger planes such as Airbus SAS of Toulouse, Boeing Co. of the US and Brazil’s Embraer SA also sell corporate jets.

In the 1990s, only large conglomerates such as Reliance Industries (which has since broken up into the Reliance Industries group run by Mukesh Ambani and Reliance-Anil Dhirubhai Ambani Group run by Anil Ambani), the Ruia family-run Essar Group or the Tata group could afford business jets. A dizzying pace of economic growth has seen these customers being joined by a growing number of businessmen who saw their already packed schedules getting even more demanding and found their penchant for such toys was no longer unaffordable.

A slowing economy and a credit crunch have altered the situation.

“Big corporates such as Reliance Industries and Sterlite Industries are selling their private jets. For instance, Reliance is looking at selling three planes," a senior executive involved in aircraft trading told Mint. This was confirmed independently by at least two other people, each involved in reselling business jets and servicing them.

A senior Reliance Industries executive said: “As of now, there is no plan to sell private jets." Chairman Mukesh Ambani’s family and senior executives use nearly half a dozen jets for their travel. The company’s hangar houses an Airbus A319 jet with custom-fitted office and a cabin. This private jet features a two-crew glass cockpit with mood-lighting on board.

DLF, India’s biggest realty firm by revenues, is also not going ahead with acquiring new planes, though it had received permission to import a Boeing business jet, Gulfstream planes and choppers made by Sikorsky Aircraft Corp. and AgustaWestland in the past two years.

A DLF spokesman, without referring to any type of plane, said his company, which owns a Gulfstream jet, has no plans to acquire more planes. “It has nothing to do with the current slowdown," he added.

Manfred Baudzus, regional sales director, executive jets, Embraer Asia Pacific, said there were fewer enquiries but no cancellations. But “there was a case of deferment by an Indian client, which I cannot disclose the details (of)."

One industry executive said he was glad his firm’s purchase of jets and payments for this were not scheduled this year. “I would have thought twice if I have to take delivery of private jets this year," said Invision Projects Pvt. Ltd managing director Vinit Pathak, who had signed a contract for 18 Phenom 100 and two Phenom 300 executive jets from Embraer for a total of $69.4 million (Rs338.7 crore today). The deliveries begin in August 2010.

Jet charter and so-called fractional jet ownership businesses are slowing too. While Jupiter Aviation is yet to start operations, Manav Singh, managing director of Club One Air, India’s first fractional ownership firm that allows customers to share flying hours, in an email to Mint confirmed that there is at least a 20% drop in the charter business, with many people cancelling their orders.

“They are very cautious. The list of aspiring fractional ownership companies and charter operators are long. They will be back once the market re-bounces," this consultant said.

“There is a drastic slowdown in charter market as corporates have reduced their flying movements. There is slowdown in aircraft import into the country, also as the liquidity position has (been) hit badly," said Koustav M. Dhar, chief operating officer and executive director of MDLR Airlines Pvt. Ltd that runs civilian airline operations as well as charter operations.

According to the latest data from the Airports Authority of India, the country’s airports regulator, the number of departures of general aviation—as different from passenger airlines that are grouped under commercial or scheduled aviation—declined by 12.6% in October compared with the same month of 2007. Such departures, including charter operations and business jets, for the period of April-October fell by 7.6% from the year ago.

Purchase of business jets will fall short of the forecast made by plane makers, industry insiders said.

Bombardier, for instance, had spotted China and India as the next two large markets for business jet orders, after Western Europe and Russia.

“The emergence of the business jet market is expected to happen within the next three years in India, as the country could generate up to 50 orders a year. India’s openness to Western commerce and the flexibility of the state could make it more likely to develop its business jet market at a faster pace. In China, significant orders could be generated within the next five years and reach up to 60 units a year," the company had said in May 2007.

Those numbers, said Karan Singh, president of Baai, would not contract but won’t grow as fast. “I would say there is no negative growth. Instead of estimated 40% growth of business jet industry, we will be only having 25% growth in coming years."