Mumbai: Encouraged by the economic recovery and anticipating a growth in premium passengers, international airlines are beginning to offer a raft of services to first and business class fliers.

While some carriers have reintroduced first class sections on certain routes, others have launched exclusive lounges at airports.

On Friday, Dubai-based Emirates Airline threw open its first such lounge in India at Mumbai’s Chhatrapati Shivaji International Airport for its first and business class passengers as well as some of its frequent flyers.

These customers will also be offered a pickup facility to the airport, which already has five premium lounges by other airlines. The Emirates lounge, built at a cost of around $4 million (Rs18.6 crore), offers services such as wireless internet access, designer bathrooms and even massages. 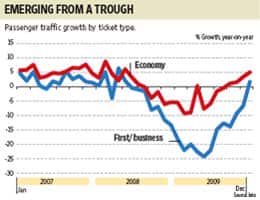 Deutsche Lufthansa AG, which operates Lufthansa, in November reintroduced a first class section on its Mumbai-Munich route, which was discontinued in November 2008 due to a global economic slowdown. A spokesperson for Lufthansa in India said the airline is also considering a lounge for premium passengers.

Swiss International Air Lines Ltd, or Swiss Air, introduced a first class section on its Mumbai-Zurich flights in September and on its New Delhi-Zurich route in October.

British Airways Plc, which in February upgraded its first class section to include a bed and a personal closet, will launch it in India shortly, a spokesperson said.

A December report of International Air Transport Association (Iata), an international trade body that represents 230 airlines comprising 93% of scheduled global air traffic, said the number of passengers paying for higher priced tickets rose marginally by 1.7% in that month from a year earlier.

Globally, airlines had a difficult time in the past year-and-a half because of the slowdown. Earlier this year, Giovanni Bisignani, director general and chief executive of Iata, said in a statement that 2009 “goes into the history books as the worst year the industry has ever seen".

The rise in December, Iata said, was the first year-on-year growth for premium travel since May 2008, when it fell 25% compared with May 2007.

Premium traffic is critical for airline earnings as a carrier can generate profits if it can fill only its first and business class seats on a flight. Such seats typically cost multiples of an economy class ticket.

“Premium traffic is picking up with the domestic economy reviving, and Indian and international carriers are getting positive responses for their business class, though corporate travel is yet to be in full swing," said Regi Philip, a travel agent who runs Cosmos Agencies in Mumbai.

An executive with GVK group, which runs Mumbai airport, said at least two leading international airlines are in talks with Mumbai International Airport Ltd for setting up exclusive lounges, but declined to name the carriers. He spoke on condition of anonymity as he is not authorized to speak with the media.