Coke’s new head must lead from the front

The fizz is back at Coca-Cola Co. After years of languishing, Coke shares have surged 33% this year.

With an extensive international pedigree and a willingness to make bold deals, Muhtar Kent looks like the right guy to help keep the momentum going. Coke shares may no longer be a bargain, but they remain a safe bet in an uncertain economic environment. 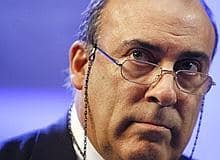 Plenty of work still remains. Catering to increasing taste for non-carbonated beverages in developed markets and sustaining strong growth in key foreign markets remains at the top of the list. The company also needs to continue to improve its relationships with bottlers, especially Coca-Cola Enterprises.

Coke shares have also been helped by factors beyond the company’s control—strong investor appetite for defensive stocks and the weak dollar, which boosts the value of earnings generated overseas.

Kent will need to articulate a clear vision of how he plans to unlock value in without such macroeconomic tailwinds. Coke shares, which of late have been trading at $63, are no longer a bargain at 21 times 2008 earnings.

Nor is it a rollicking growth story. Still, Goldman Sachs Group Inc. estimates that Coke can deliver consistent 11-12% annualized earnings growth over the next three-five years. With the prospect of recession, or at least slower economic growth looming on the horizon, that may be a lot more exciting for investors than it sounds at first blush.