Bengaluru: Mutual fund investors such as Morgan Stanley, Fidelity Investments, Valic and Vanguard Group Inc.—which together hold a small stake in Flipkart—are still divided over the valuation of India’s most valuable internet start-up, which recently raised $1.4 billion in fresh capital.

In the latest filings issued by mutual funds owned by the four banking and financial services firms, two—Morgan Stanley and Vanguard—have upped the valuation of their holdings in Flipkart, while two others have marked it down.

All of them value currently Flipkart at less than the $11.6 billion post-money valuation it secured in its funding round in April. While the mutual fund investors’ estimates of Flipkart’s valuation will not damage its image as much as last year, their estimates will still have significance as one of the indicators of Flipkart’s turnaround efforts. 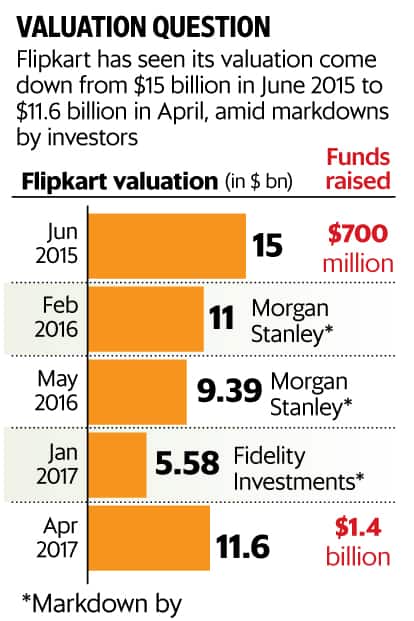 In a filing with the US Securities and Exchange Commission, Morgan Stanley Institutional Fund valued each share of Flipkart Online Services Pvt. Ltd at $70.68, up from $50.51 during the December quarter—indicating a valuation of about $7.5 billion and up nearly 40% from the previous quarter. For the same period, Vanguard Variable Insurance Fund valued each Flipkart share at $74.04 a share—an 8.9% jump from the previous quarter and indicating a valuation of about $8 billion.

For the three months ended February 28, Valic valued each Flipkart share at $94.27, marginally down from $95.83 in the previous quarter and indicating a valuation of close to $8.5 billion.

Fidelity continues to be more bearish on Flipkart than the other investors—for the same period, Fidelity Rutland Square Trust II also trimmed Flipkart’s valuation to $50.51 per share, down from $52.13, valuing Flipkart at about $5.4 billion.

In the three months to December, Morgan Stanley had marked down the value of its holdings in Flipkart for the fifth consecutive quarter, while Fidelity had slashed Flipkart’s valuation by over a third during the three-month period ended in November.

To be sure, the latest filings from the four mutual fund investors were issued for the March quarter, prior to Flipkart’s latest fund raising. In April, Flipkart raised $1.4 billion from Tencent Holdings Ltd, Microsoft Corp. and eBay Inc. at a post-money valuation of $11.6 billion—down from its peak valuation of $15.2 billion when it raised funds in 2014.

Experts noted that the latest filings were issued after taking Flipkart’s recent turnaround in fortunes into consideration—suggesting that investors are still divided over Flipkart’s long-term ability to retain its leadership position in India’s online retail market in the face of a relentless challenge from deep-pocketed arch-rival Amazon.com Inc.’s Indian arm.

Flipkart did not immediately respond to an email seeking comment, but in the past has dismissed valuation markdowns by investors as “a theoretical exercise".

The latest assessments from these investors seem to suggest that a bunch of investors still feel that Flipkart is currently overvalued. And while the recent valuation markdowns (or even mark-ups) by mutual funds may not accurately reflect Flipkart’s exact current valuation, in a way, they mirror the prevailing investor sentiment that most of India’s large, new-age internet start-ups are overvalued.

Since former Tiger Global Management executive and current Flipkart CEO Kalyan Krishnamurthy returned in June 2016, the company has scripted a turnaround, fending off Amazon in the Diwali season sale and reclaiming the top spot in Indian e-commerce. The recent performance was reflected in Flipkart’s post-funding valuation in April even though it was technically a so-called “down round".