RCom: End of an era, beginning of another?

Anil Ambani's debt resolution plan for Reliance Communications will lead to the creation of a new RCom, essentially a transformation from a B2C into a B2B entity

New Delhi: In about three months from now, if Reliance Group chairman Anil Ambani has his way, he would have sold the spectrum, tower, fibre and real estate assets of Reliance Communications Ltd (RCom).

The divestments, together with the sale of the telecom company’s media convergence nodes and exit from a strategic debt restructuring exercise with its lenders, will mark the end of an era for the company he inherited after a 2005 settlement with older brother Mukesh Ambani. 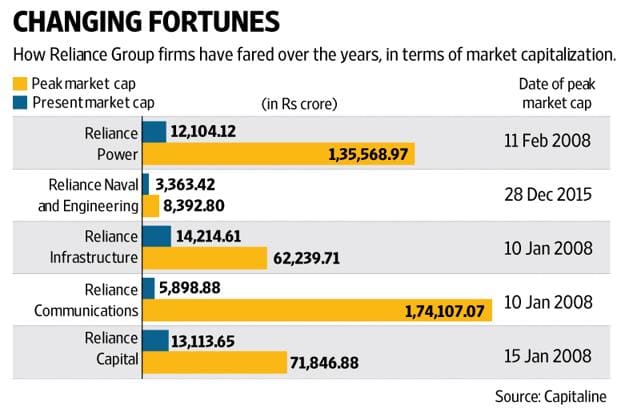 Under that settlement, the brothers carved up the business empire created by their late father Dhirubhai Ambani. Mukesh Ambani took control of the flagship energy business.

The younger Ambani’s plans will lead to the creation of a new RCom, he claimed on Tuesday.

RCom will essentially be transformed from a business-to-consumer (B2C) into a business-to-business (B2B) entity, which will provide submarine cable systems that will deliver the latest sub-sea cable technology to meet growing cloud infrastructure and data capacity demand from global enterprises and over-the-top, or OTT, service providers.

Ambani said the new RCom will be valued at Rs15,000 crore. The business, he said in a presentation, will be based on a capex-light model and will generate sustainable cash flows, with 50% of revenue and 60% of operating profit coming from outside of India.

RCom and other telecom companies have been hurt by intense price competition, and piled on debt in their quest to expand market share, offering high prices for expensive airwaves.

Reliance Group has made other divestments as part of an effort to reduce Rs45,000 crore of debt.

The big question is how Reliance Group, previously known as the Anil Dhirubhai Ambani Group, will look now as it exits from its flagship telecom business.

One emerging business is clearly defence manufacturing. The group has tied up with global defence companies for starting production in India. It recently commenced the construction of a manufacturing facility in Nagpur, Maharashtra, in a joint venture with French company Dassault Aviation SA to manufacture components for the latter’s aircraft.

Reliance Group is making patrol boats for the Indian Navy, with a total order value of Rs2,500 crore. It is also engaged in the construction of a training ship as well as 14 fast petrol vessels for the coast guard, an order worth Rs920 crore.

The conglomerate has also signed a master ship repair agreement with the US Navy to undertake servicing and repairing works for vessels of its seventh fleet. Currently, these vessels visit Singapore or Japan for such works. The group has also submitted bids for two landing platform docks, that are likely to be worth Rs20,000 crore.

Defence has indeed emerged as a great opportunity for Indian businesses, according to Sunil Kant Munjal, chairman of Hero Enterprise. “It is a sunshine sector that will truly exploit India’s manufacturing abilities," Munjal said in a recent interview.

Several other companies think so too and have entered defence manufacturing.

One analyst, though, said it is still uncharted territory.

“In India, businesses are incrementally grown over other businesses. Look at Sunil Mittal (of Bharti Airtel Ltd), Mukesh Ambani. They have done that. We don’t know how this would work for Anil Ambani’s defence business," the analyst said on condition of anonymity.

As for now, Anil Ambani won’t answer questions on the group.

“Do not deny me an opportunity of meeting you again," he said at a press conference at Reliance Centre in Santa Cruz, Mumbai, politely skirting questions.

Still, Ambani added: “I think I can’t claim to be a subject matter expert on these issues. But I think I have a little bit of insight into some of these issues. I hope as a group and as Reliance Communications, we never ever... have to ever understand appreciate, analyse, or face an IBC, an NCLT or SDR or any such process ever."

IBC is short for the Insolvency and Bankruptcy Code, and NCLT stands for the National Company Law Tribunal. SDR is strategic debt restructuring, which RCom has exited.