The profit fell short of analysts expectations. Analysts on average had expected the company to report a net profit of ₹ 301 crore, according to Thomson Reuters I/B/E/S. 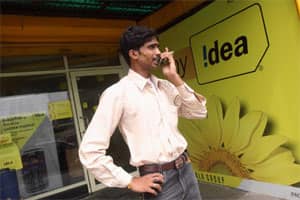 The management cited a 2.3% slide in the average revenue per minute, or ARPM, to 41.2 paise from 42.2 paise in the previous quarter, which it said suggested “the industry growth is likely to be muted in the first half of this financial year."

Harit Shah, an analyst at Nirmal Bang Securities Pvt. Ltd, agreed. Given that the second quarter (July-September) is a seasonally weak one for the telecom sector, “the first half for the telecom companies will not be good and we may see some downgrades", he said.

The “result was very much in line with our expectation", said Ankita Somani, a technology and telecom analyst at Angel Broking Ltd. Regardless, she said, the brokerage is neutral on Idea Cellular and other telecom companies, given the uncertainty in the sector.

Mobile phone carriers in India, the world’s second-biggest telecom market, have been hit by fresh regulatory uncertainty after the Supreme Court in February cancelled all 122 licences and 2G spectrum allocated in 2008.

Idea is set to lose seven of its 22 zonal operative licences when the court order becomes effective in September and must win back those permits in an auction to retain its all-India presence and compete with bigger rivals Bharti Airtel Ltd and Vodafone Group Plc’s local unit.

It remains to be seen how much Idea ends up paying to win back the permits. 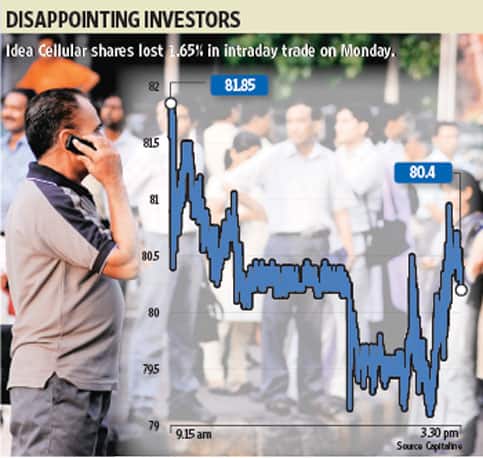 The Aditya Birla Group company, in which Malaysia’s Axiata Telecom owns about 20%, had about 116 million mobile customers as of May— an increase of 22% from June 2011.

Idea, the management said, made a cumulative net gain of 3.5 million customers as on 10 July from other operators by means of mobile number portability. Its active 3G subscriber base, too, expanded to 3.1 million.

“Due to the introduction of the Telecom Consumer Protection Regulation by the Telecom Regulatory Authority of India (TRAI), effective from 22 March, and a grim market battle for supremacy, Idea’s strong revenue performance of the last two quarters has slowed down on a sequential quarterly basis to only 2.5% revenue growth," the company said. It added that long-term business outlook for the company remains positive.

“The minutes’ growth is stable at 5.3% generating 131 billion minutes compared with 124 billion minutes in the previous quarter (January-March 2012) strengthening its market share," it said.

With technology cycles becoming shorter, “we have revised the useful life of certain fixed assets during the quarter, thereby increasing the depreciation charge by ₹ 48 crore, and also the impact of a sharp currency depreciation has reflected in interest and finance cost with a forex loss of ₹ 24.5 crore in this quarter compared with a forex gain of ₹ 13.5 crore in the January-March quarter last fiscal," the company said.

The company said it remains committed to expanding its share of non-voice revenue, which now contributes 14.5% of total service revenue, and to overcoming the current uncertain regulatory phase.