Bangalore: Adani group is examining a possible deal to buy the export terminal at Dhamra port in Orissa that has been lying mostly idle since it opened for operations in September.

Dhamra Port Co. Ltd (DPCL) put up the dry bulk export terminal for sale as iron ore shipments from India—meant to be its main commodity—hit a hurdle due to increases in export duty and rail freight rate.

The terminal has loaded a mere 200,000 tonnes of iron ore in the eight months since it began operations, though it is equipped to handle about 13.5 million tonnes (mt) a year.

DPCL mandated Kotak Investment Banking to find a buyer for the export terminal. 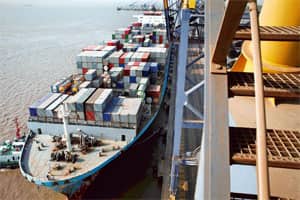 “We have been approached by Kotak and we are analysing the deal," an executive at Adani group said on condition of anonymity because the firm is bound by a confidentiality agreement it has signed with the investment bank.

A deal at Dhamra will help the Ahmedabad-based Adani group strengthen its presence on the eastern coast, besides helping its commodity trading business, said an executive at the Mumbai office of a global consulting firm. He did not want to be named because of his company’s policy on speaking with the media.

Mint has reviewed a copy of the note prepared by Kotak Investment Banking for the benefit of potential suitors for the transaction, which it has code-named Project Vulcan.

“It’s a strategic move," said Santosh Kumar Mohapatra, chief executive officer of Dhamra Port, an equal joint venture between Larsen and Toubro Ltd and Tata Steel Ltd. “If someone else sees greater value in running the terminal as an export facility, then why not."

The sale of the export terminal will be structured through a sub-lease agreement whereby the investor will have to pay some upfront money and share a portion of the annual revenues with DPCL.

The quantum of the revenue share will be determined through a bidding process, according to a person briefed on the proposed transaction, who declined to be identified. This is the format typically followed for port deals.

Being a port outside the Union government’s control, DPCL is free to set its own rates. Rates at Union government-controlled ports are set by the Tariff Authority for Major Ports.

Port consultants, however, said this may not be the right time to sell the export terminal because of the weak market conditions, but Dhamra port may be under pressure from its lenders.

“They will not get the right valuation," said an executive with a Mumbai-based infrastructure consultancy, who, too, declined to be named.

DPCL could be under pressure from its banks, led by IDBI Bank Ltd, which have loaned it about ₹ 2,500 crore to construct the new port, the executive said.

Dhamra Port also runs a coal import terminal that has a capacity to load 13.5 mt of cargo a year. This terminal has loaded about 6 mt since it began operations in May for customers including Tata Steel, and is not on sale.

DPCL was awarded the rights to develop and operate a port at Dhamra for 30 years by the Orissa government in 2004. The contract can be extended for two additional periods of 10 years each.

Dhamra port, located between the Union government-controlled Haldia and Paradip ports, is one of the deepest on India’s eastern coast and is capable of allowing super cape-size vessels—the biggest of the dry bulk ships capable of loading as much as 180,000 tonnes of cargo—to dock.

The port is located close to the mineral belt of Orissa, Jharkhand and West Bengal and is connected to the hinterland (cargo-generating areas) through a 62km-long railway track linking Dhamra to Bhadrak on the main Howrah-Chennai line. The ₹ 900 crore rail link, funded by DPCL, is the longest electrified private rail line in India.

A ban on the export of the steel-making commodity from Karnataka, India’s second biggest producer of iron ore, was compensated by production from the eastern region.

“However, the 30% export duty on iron ore and a higher rail freight for moving the commodity for exports has made India’s iron ore totally uncompetitive in the global market. This has led to the drop in India’s iron ore exports," Sharma said.

The rail freight for transporting iron ore meant for exports is more than three times the rate for local movement of the commodity, he noted.

The problems facing India’s iron ore trade has forced firms that put up port facilities for exporting the commodity to look at options.

In February, the board of Ennore Port Ltd, India’s only corporate port controlled by the Union government, agreed to a request from Sical Iron Ore Terminals Ltd to handle coal at its iron ore loading facility after the export ban on the commodity from Karnataka rendered the terminal idle since it was opened in January 2011. Sical Iron Ore is a joint venture company formed by Sical Logistics Ltd and state-run commodity trader MMTC Ltd to develop and operate the new terminal at Ennore port in Tamil Nadu for 30 years.