New Delhi: Anil Ambani, chairman of the Reliance Anil Dhirubhai Ambani Group (R-Adag) made a surprise appearance in the Supreme Court to witness the hearing in the gas dispute with his estranged brother Mukesh Ambani. 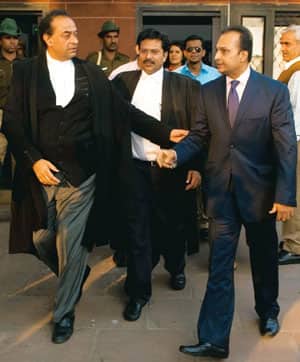 “My presence in the Hon’ble Supreme Court today (Tuesday) reflects my deepest regard for our judiciary. I have come here today not just on my own behalf but on behalf of nearly 11 million shareholders of the Reliance ADA Group—the largest shareholding family in the world—whose interests will be directly affected by the outcome of this case," Ambani said in a statement released by R-Adag.

The Mukesh Ambani-led Reliance Industries Ltd (RIL) and Anil Ambani’s Reliance Natural Resources Ltd (RNRL) have been slugging it out in the courts over the pricing and supply of gas from RIL’s D6 block in the Krishna-Godavari (KG) basin to the latter’s plant in Uttar Pradesh.

Meanwhile, RNRL counsel Ram Jethmalani stressed that there was nothing private about the memorandum of understanding (MoU) as alleged by RIL. Countering RIL’s plea that the board was unaware of the MoU between the parties, Jethmalani said RIL’s board resolution of 18 June, 2005 showed that its decision of restructuring was based on the MoU.

According to this resolution, Anil Ambani was to be reinstated on the RIL board in case the scheme of arrangement (the MoU) did not go through. One seat on the board was kept vacant for this purpose, he added.