Sanofi’s H1N1 vaccine approved for use

New Delhi: The government has approved the use of Sanofi Pasteur SA’s H1N1 influenza vaccine and has started sending it to the states to inoculate frontline health workers and those at maximum risk of getting infected.

India had purchased 1.5 million doses from Sanofi and was awaiting regulatory approval for their use.

“The supplies are being sent to the states," said Vineet Chawdhry, joint secretary, ministry of health. Sanofi conducted a bridging study for its H1N1 vaccine in Delhi and Pune among 100 subjects to determine the vaccine’s behaviour among Indians.

Human clinical trials, or in this case bridging studies, are a prerequisite for any company wanting to sell drugs in India. A bridging study is supplemental research performed in a new region to provide clinical data on efficacy, safety, dosage and dose regimen. 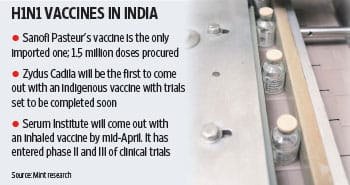 In an earlier interview, DCGI Surinder Singh had said that while the regulator had decided to go ahead with imports without the immunogenecity data, it subsequently decided to wait for these findings. The DCGI was unavailable for further comment. Vaccines may provide different degrees of protection in different people depending upon numerous health and nutrition-related factors.

The ministry had been in talks with four international vaccine makers—GlaxoSmithKline Plc , Baxter International Inc., Novartis AG and Sanofi Pasteur, with the contract being awarded to the last company. The others didn’t conduct bridging studies in India.

After the imports from Sanofi, the ministry will wait for indigenous H1N1 vaccines since they will be cheaper and made for the local population. The government is supporting three Indian companies in making the vaccine—Serum Institute of Pune (in phase II and III of human clinical trials); Bharat Biotech International Ltd, Hyderabad, and Panacea Biotec Ltd, Delhi. Serum Institute will be the only manufacturer to have a live vaccine (having live, attenuated micro-organisms) in the country and this will be inhaled through the nose and not injected. A fourth manufacturer, Zydus Cadila, which was first to start human trials of the vaccine, is expected to have the vaccine ready by April.

The government has obtained 40 million capsules and 400,000 bottles of the antiviral drug oseltamivir to treat infections. The drug is sold in the country through restricted channels such as pharmacies licensed to sell Schedule X drugs.