While India's economy has overtaken France to become the world's sixth largest, manufacturing has shrunk to about 15% of GDP from a peak of 18.6% in 1995, according to a World Bank report

New Delhi: Despite a sleek marketing campaign, the world isn’t quite ready to ‘Make in India.’

Last week, Indian Prime Minister Narendra Modi and South Korean President Moon Jae-in celebrated the inauguration of what Samsung Electronics Co. Ltd. called the world’s largest mobile phone factory. At the splashy event just outside New Delhi, Modi said the facility was “extremely important" for his Make in India initiative to boost manufacturing to 25% of India’s economy by 2020 and create millions of jobs. Samsung said the plant was a “shining example" of the success of the program.

But the investment is more the exception than the norm. Data from the World Bank and the Reserve Bank of India (RBI) show manufacturing hasn’t received a significant boost since Modi took office in 2014.

While India’s economy has overtaken France to become the world’s sixth largest, manufacturing has shrunk to about 15% of gross domestic product (GDP) from a peak of 18.6% in 1995, according to the World Bank. Other data show new investments in India have dropped and stalled projects are on the rise. 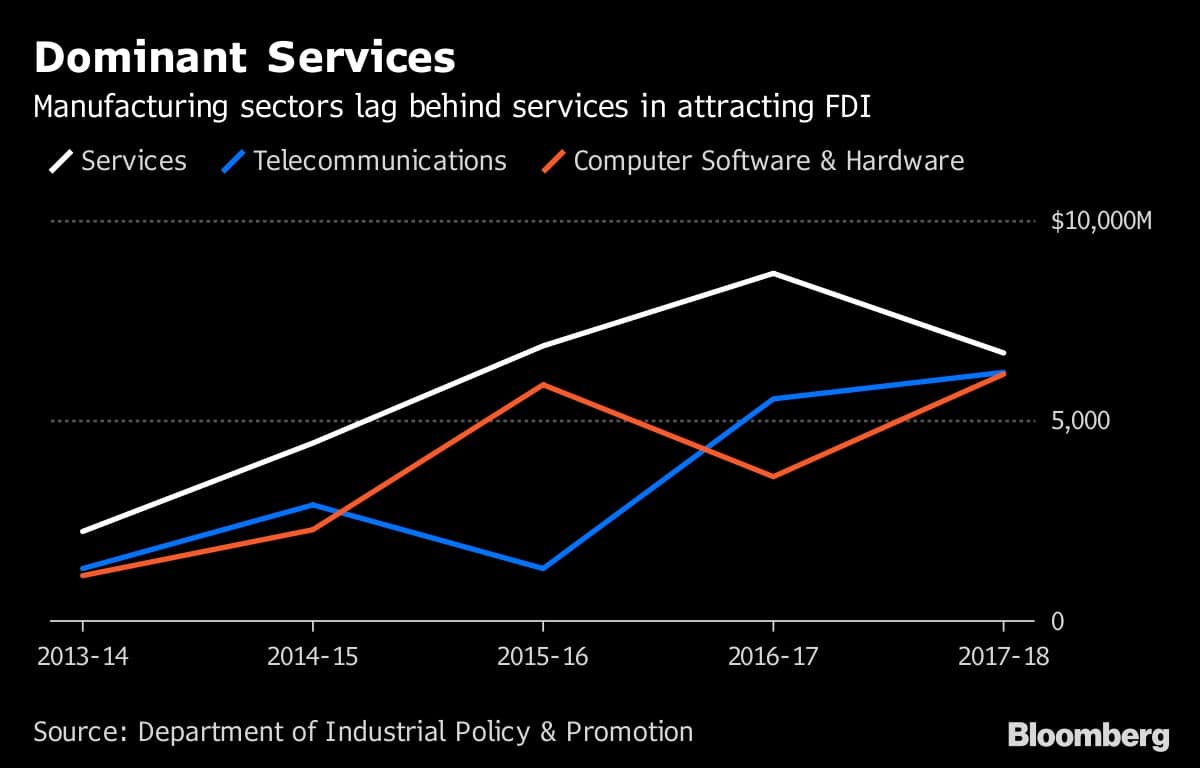 “The Samsung announcement is good news, but it must be seen as a one-off at present," says Vivek Dehejia, an associate professor of economics at Carleton University in Ottawa. “Make in India is a noble aspiration of the Modi government. Yet, in the absence of a supporting infrastructure and ease of doing business environment, it’s a tough challenge."

The initiative is a worthwhile attempt to lure global businesses, analysts say, but it hasn’t been accompanied by enough meaningful changes to revive manufacturing or alter what is essentially a services-oriented economy.

Spokesmen for the Prime Minister’s Office and the commerce ministry didn’t respond to requests for comment.

Unlike Beijing’s Made in China 2025 program — which targets strategic industries from robotics to new-energy vehicles through state investment and subsidies — Modi’s Make in India plan is more of an investment promotion strategy. 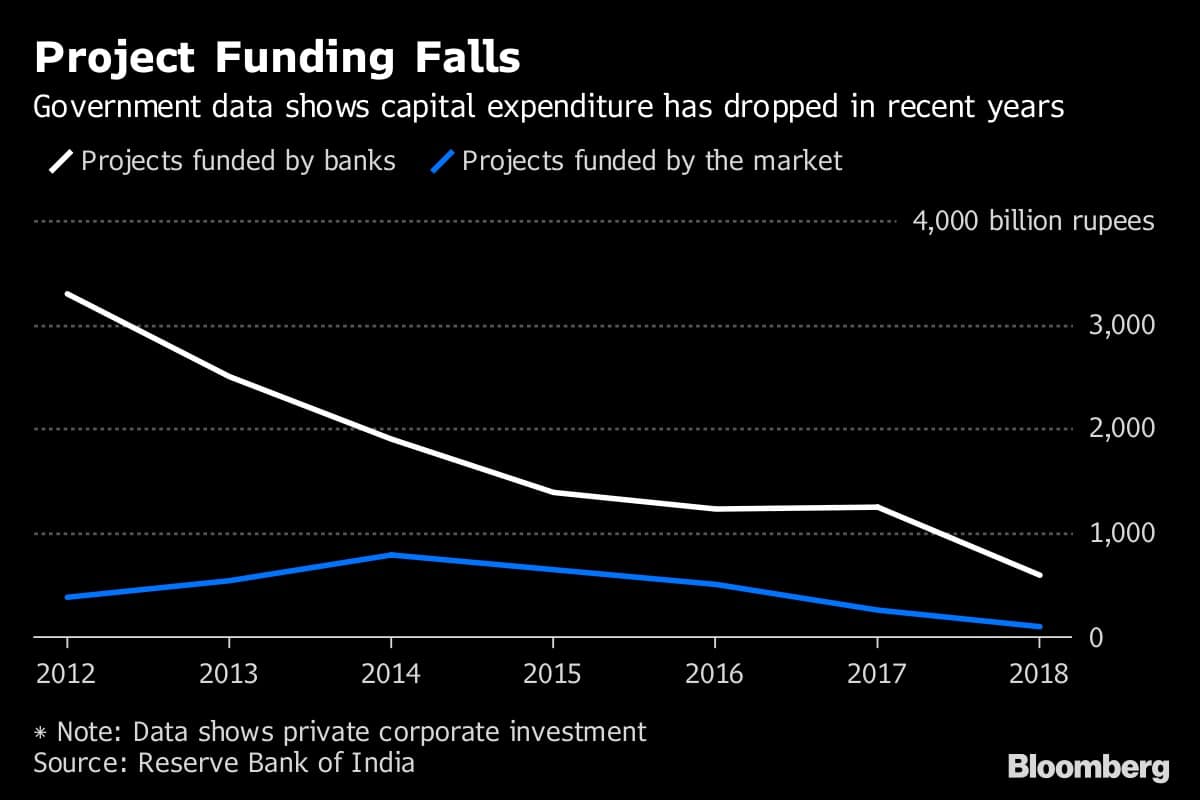 One of the key reforms under the initiative launched in 2014 was the loosening up of foreign investment restrictions in several sectors, including defence.

The value of stalled projects climbed to ₹ 7.63 trillion from 5.29 trillion during that period. Even data from the Reserve Bank of India’s bulletin show that corporate capital expenditure has fallen since Modi came to power. 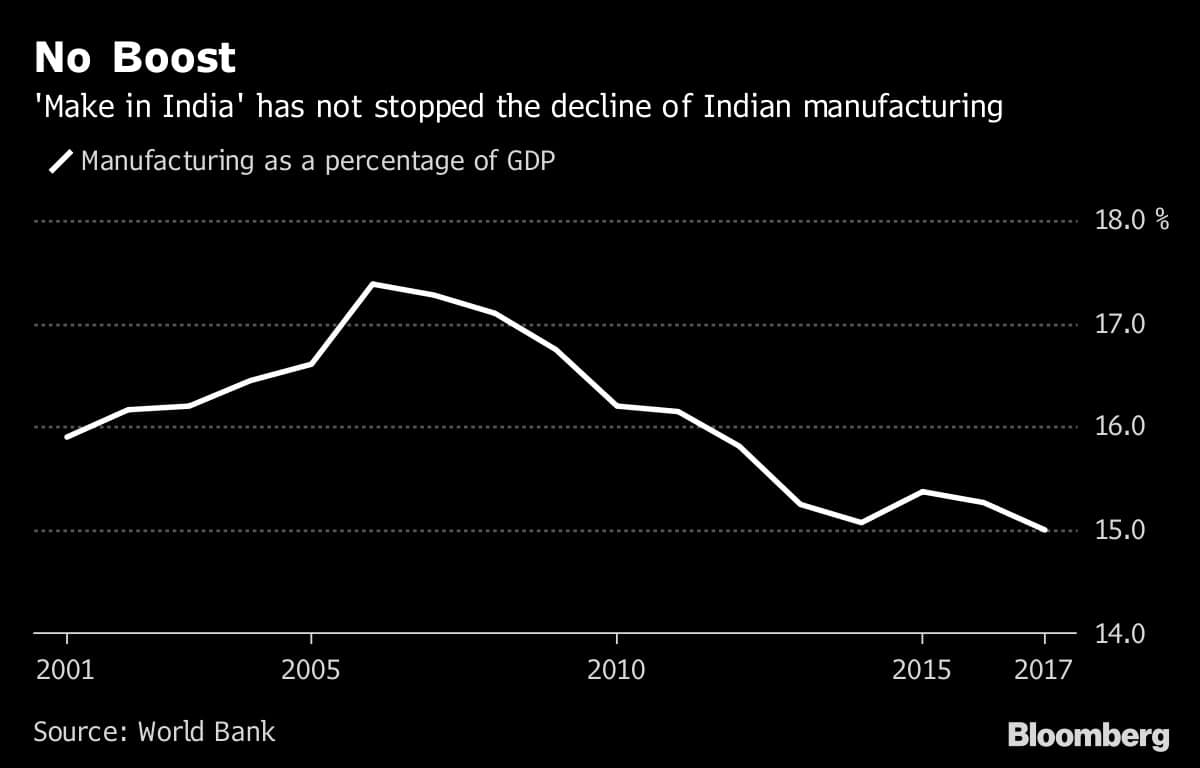 “It now needs to wait for these capacities to be absorbed fully before new capacities are built aggressively again," Vyas said. He added “the world has become a lot more protectionist and is more keen to retain employment on its shores than exporting these to other countries."

Those capacities have done little to temper growth in imports of foreign-made goods. Rising purchases of smartphones and TVs have made electronics India’s second-biggest import item after oil, and is pushing the nation’s trade deficit wider.

Under Modi, record foreign direct investment has flowed into India and the country’s ease of doing business ranking has improved. Most investment, such as Amazon.com Inc.’s $5 billion commitment to expand operations in India, has gone into the nation’s dominant services and technology industries.

FDI remains just 1.2% of India’s overall investment, according to Bloomberg Economics analyst Abhishek Gupta. High-profile investments from foreign firms “should not be confused with an overall improvement in investment activity in India," he said.

With more jobs created in the services sector, Modi’s program should focus on investments there, said Gupta. 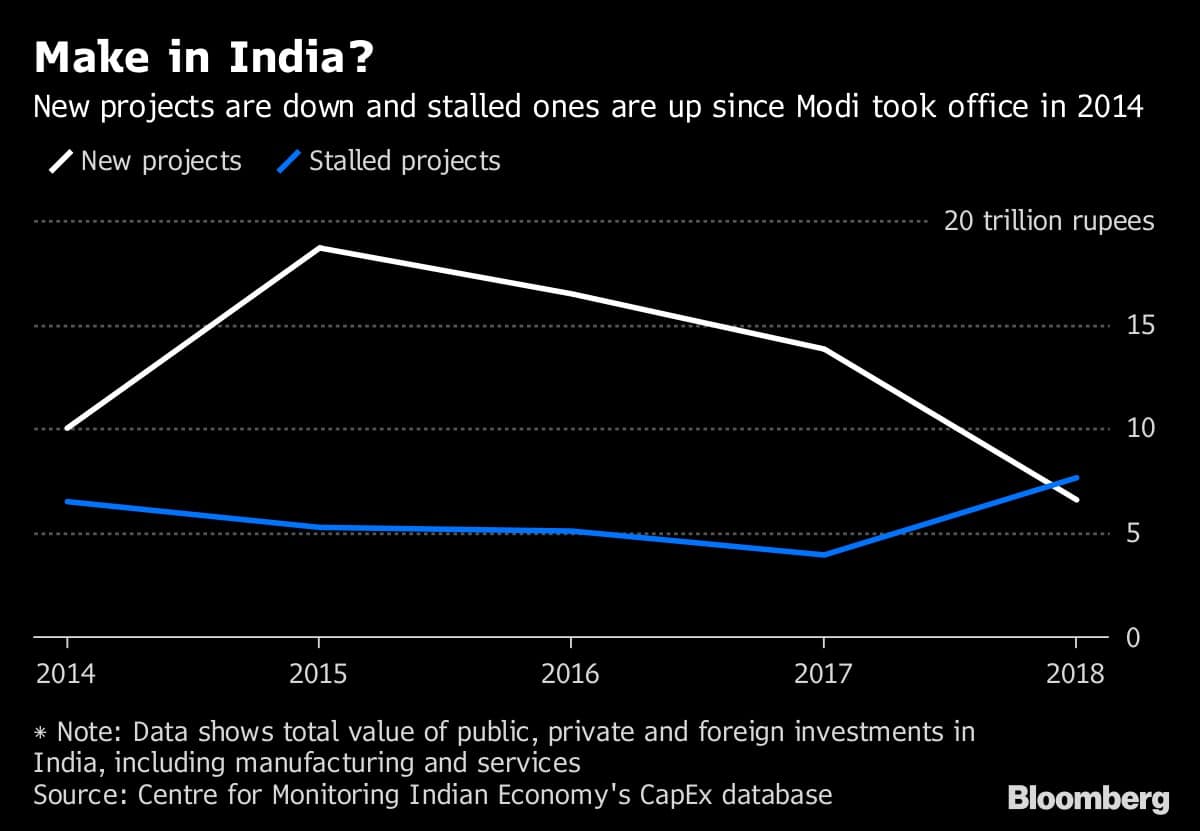 “Job creation in India could hugely benefit if Make in India’s focus is expanded to include more services, relative to its overemphasis on manufacturing," Gupta said. “India’s tough labor laws and higher bureaucratic entry barriers into manufacturing, along with its widespread fluency in English — a boon in global services — suggests that its comparative advantage lies in services."

Even the Make in India program’s mascot — a lion composed of gears — hasn’t avoided the onerous regulations and occasional political interference that are still common in India and a key obstacle to investment.

A large lion statue, built by one of India’s state-owned companies to promote the manufacturing program, reportedly ran afoul of rules when it was placed outside the Department of Industrial Policy and Promotion in New Delhi. And a separate branding exercise involving colourful lion structures in Mumbai led to accusations they violated local heritage regulations.

“Manufacturing’s share of GDP continues to stagnate in India as in other major economies. One large deal will not change that overnight," Dehejia said.