Bangalore/New Delhi/Mumbai: Although lenders and concessionaires point to funding difficulties for road projects that they won bids for last year, their financial numbers show the situation has been in the making for some time.

Aggressive bidding on the back of high traffic growth projections coupled with a debt pile-up and steep interest rates have stressed the income statements of construction firms. For a set of 87 firms with a significant presence in infrastructure, sourced from the Capitaline database, these numbers show an increasing difficulty to service debts. 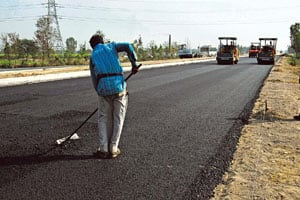 Financial woes: Aggressive bidding on the back of high traffic growth projections coupled with a debt pile-up and steep interest rates have stressed the income statements of construction firms. Photo: Satish Kaushik/Mint

It doesn’t show how sharply some firms have been impacted. At least 17 of them, or about one-fifth the sample, have interest coverage ratios of less than one. That means in fiscal 2012, they did not earn enough to cover interest payments.

The list includes some of the bigger and better-known firms in this industry such as Hindustan Construction Co. Ltd, Gammon Infrastructure Projects Ltd and GMR Infrastructure Ltd.

To be sure, a sluggish economy and high interest rates have meant this metric has worsened across industries. But the sharp deterioration for construction firms can be contrasted with a still respectable coverage ratio of 3.41 for all BSE 500 firms, excluding banks, on the Bombay Stock Exchange.

An analyst said these figures are significant, as companies have been bidding aggressively, especially in highways, to win contracts.

“There are cases of aggressively bid highway projects which are finding it difficult to reach financial close within the given six months’ time, primarily because at the time of bid they looked attractive" but banks aren’t so sure in the current economy, said Amrit Pandurangi, a senior director at Deloitte Touche Tohmatsu India Pvt. Ltd, a consultancy.

Pandurangi said the fact that companies had such high ICRs was “obviously... not a healthy sign", and that the high debt levels would ensure that the companies might have difficulty achieving financial closure on time.

Punj Lloyd Ltd has limited exposure to highway projects, chief financial officer Raju Kaul said. “Seventy-five percent of our operations are outside India for which we mostly take up dollar debt from institutions in the countries the projects are based in," he said.

“We are looking at multiple ways of improving liquidity including sale of assets," said Ankineedu Maganti, managing director of Soma Enterprise Ltd. Maganti said that Soma was looking at diluting its stake in a highway project, but declined to mention the name of the project, citing ongoing talks. The company has stake in eight highway projects.

A June report by analyst firm Kotak Institutional Securities found, after reviewing 22 road projects with already established revenue lines, as many as nine projects may have a negative book value as measured by the price to book value (P/B) ratio, which compares a company’s stock price to its book value. A low P/B ratio typically means that the stock is undervalued.

The report also noted that the first half of financial year 2012 saw as many as 16-18 bids as opposed to two or three in 2010 and that aggressive bidding saw projects being bid at premiums much higher than anticipated by the National Highways Authority of India (NHAI). “This may make value creation even more difficult for new/recent project wins," the report said.

Highway lenders and developers met NHAI officials on 5 August. An official with the highway authority, speaking on condition of anonymity, said last week that the authority had even written to the finance ministry asking for a “stimulus" package after a similar meeting in July. Some 17 of of the projects awarded last year have not reached financial closure. Concessionaires typically have until six months after signing the contract documents to sew up funds for the project.

Shubham Shivang contributed to this report.