Winds of change at Suzlon Energy

The ill-fated REpower deal left Tulsi Tanti in a debt quagmire. Now, the humbled founder says he has a plan to make Suzlon Energy great again

The other deals soured too, but Tanti’s German misadventure was the first. REpower soon became an albatross around Suzlon’s neck, as Tanti could not repay the debt taken to finance its purchase. It led to India’s biggest convertible bond default, torturous negotiations and a debt recast, ending in the sale of REpower—renamed Senvion—to Centerbridge Partners LP for €1 billion in 2015. 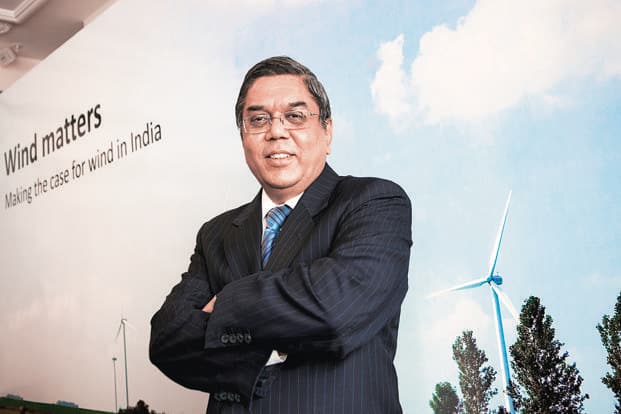 It’s a journey that he would rather forget, but Tanti, who chairs Suzlon that once made one in two wind turbines sold in India, is on the move again. And if he is to be believed, with the turnaround strategy he has in mind, he will be making one in two turbines again. In an interview in his Mumbai office, Tanti said the sole loser in the debt saga was “the promoter", referring to himself.

Humbled, but still in the game.

The founder of what was once the world’s fifth largest wind turbine maker, Tanti, 58, has seen at least three downturns in the two-decade-old business. After posting losses in all quarters of 2014-15 and 2015-16, with the exception of a profit in the June 2015 quarter, Tanti is once again rebuilding his business, aiming to turn Suzlon profitable this fiscal. Plus, he aims to get the company back in the list of the world’s top five wind turbine makers—a spot it lost when Senvion was cut loose.

We target to reclaim 50+% market share progressively in the medium term. Next year, the industry is likely to grow by 30% and Suzlon will grow higher than the industry for the next three years. With Suzlon expected to grow faster than market; market share gain is imminent- Tulsi Tanti, founder of Suzlon Energy

“We target to reclaim 50+% market share progressively in the medium term," said Tanti in response to an email questionnaire following a meeting in February. “Next year, the industry is likely to grow by 30% and Suzlon will grow higher than the industry for the next three years. With Suzlon expected to grow faster than market; market share gain is imminent." Suzlon had a 27% share of the market in fiscal 2016.

“An entrepreneur never thinks of quarter-on-quarter; he thinks for 25 years, 50 years," Tanti said in the interview. “We know the cyclones will come because we are in the wind sector. It cannot be consistent high wind; sometimes, it can be low wind. We are designing our turbines assuming that one day even a cyclone will come."

Tanti’s optimism doesn’t find many takers though. For one, the wind turbine business remains a capital-intensive one. And second, while Suzlon wrestled with its lenders, rivals such as Inox Wind Ltd and Gamesa Wind Turbine Pvt. Ltd have gained ground.

Maybank Kim Eng Securities analyst Anubhav Gupta does not think Suzlon will be able to claw back the market share it lost. He expects individual market shares of Suzlon, Inox and Gamesa to stabilize at 25-27%. “It is very difficult not only for Suzlon, but also for Inox or Gamesa to eat into each other’s market shares." Gupta was referring to the share of capacity installed in fiscal 2016.

It is very difficult not only for Suzlon, but also for Inox or Gamesa to eat into each other’s market shares- Anubhav Gupta, analyst with Maybank Kim Eng Securities.

Analysts also point out that Suzlon is at a slight disadvantage because of the profile of its clients.

Inox and Gamesa have significantly higher share in selling to independent power producers (IPPs), while Suzlon has a bigger share with investor clients, who look for tax benefits from accelerated depreciation, according to Gupta. The latest Union budget capped this tax benefit at 40% from April 2017, down from the previous 80%. Suzlon has been trying to win more orders with the IPPs.

A senior analyst from an international brokerage also said the market is not ready to take another bet on Suzlon so soon. “Suzlon has a long battle ahead to restore the glory. The entry into solar by Suzlon is partly to convince the market that it is spreading the risks," said the analyst requesting anonymity as he is not authorized to speak to the media.

For every naysayer, there is a believer.

“In my view, company is on track and could get the maximum benefit out of the government’s ambitious plans for renewable energy. There is still enough room for business growth and we believe that the demand for wind turbines is still at a very nascent stage in India," said Pendharkar.

“For diversification, the company has also entered into solar EPC (engineering, procurement and construction), which I believe could be a good move, considering the government is focusing more on solar rather than wind."

In my view, Suzlon Energy is on track and could get the maximum benefit out of the govt’s ambitious plans for renewable energy. There is still enough room for business growth and we believe that the demand for wind turbines is still at a very nascent stage in India- Tushar Pendharkar, head of research, Right Investment Advisory Services

Part of the reason behind Tanti’s optimism is the government’s ambitious plans to push clean energy. India has a target of installing 100GW of solar power capacity and 60GW of wind power capacity by 2022. The total installed capacity of renewable energy stands at 30GW, of which wind energy projects account for 24GW, solar contributes 5GW and the remaining comes from smaller sources, such as biomass.

During the climate change talks held in Paris in December, Prime Minister Narendra Modi said that by 2030, 40% of India’s installed power capacity will be based on non-fossil fuel. India was also among the 20 nations that pledged to double clean energy research investment in the next five years.

Companies and investors alike believe that the government’s focus on clean energy presents a strong business opportunity for renewable energy producers and, in turn, those that make equipment for them.

India’s wind energy market is expected to grow at an annual average rate of 20% over the next five years, helped by the government’s initiatives and the entry of large investors due to the attractive return on investment, which is an internal rate of return of at least 14%, according to a 17 December report by Maybank Kim Eng Securities.

Meanwhile, the government’s ambitious solar power target and the consequent excitement have pushed down solar power tariffs to record lows of below ₹ 5 per unit. In January, Finland-based energy firm Fortum Oyj quoted a per unit price of ₹ 4.34 to bag the mandate to set up a 70MW solar plant under NTPC’s Bhadla Solar Park tender. It was in this backdrop that Suzlon stepped into the sector, which Tanti has called “complementary" to wind power. The company in January received letters of intent from the Telangana government to set up six projects with a capacity of 210MW, which it had won in August 2015 by quoting tariffs between ₹ 5.49 and ₹ 5.69 per kilowatt hour. In April, Suzlon acquired five companies for an undisclosed sum to help implement its diversification into the solar energy industry. Tanti says Suzlon will focus on building projects on a turnkey basis for its clients, who win bids for solar projects.

“Indian solar market appears in full bloom right now. 25GW of projects are under different stages of development. The market is growing at an exponential rate, about 35 new tenders with a cumulative capacity of 15.5GW were announced last year and an additional 5GW of new tenders are to be announced in the coming months," said a 22 April report by Bridge to India, a renewable energy consulting firm.

Tanti has a three-pronged strategy for revival: introduce next-generation turbine technology; launch hybrid solutions including wind and solar energy; and bring in power storage solutions over the next three to four years.

Tanti is most excited about hybrid solutions, which he says will boost plant load factors for power producers using both wind and solar energy. “We are building our first hybrid wind and solar project in Rajasthan. We have already signed an agreement with the government for a 1.5GW project," he said.

In its mainstay wind business, Suzlon wants to target a production capacity of 3,500-4,000MW a year. The company plans to grow capacity up to 5,000MW in the next few years.

Along with laying down the business plan, Tanti also has to keep an eye on finances, which had spiralled out of control in the last phase of expansion.

According to Tanti, finances are improving and the process is yielding results. However, while debt levels have been halved to ₹ 8,000 crore, they remain high. Suzlon, which made losses for the past six financial years, halved its interest costs last fiscal. “And it will further reduce in FY17 because we are optimizing our financial cost," he said.

The sale of Senvion in January 2015 helped Tanti bring down debt. A month later, Dilip Shanghvi Family and Associates (DSA) acted as a white knight for Suzlon, buying a 23% stake in the firm for ₹ 1,800 crore. Management control remained with the Tanti family through a pooling arrangement for voting. DSA is the largest shareholder in Suzlon. DSA declined comment to an email query sent on 16 May.

On 2 April, Suzlon said it has appointed J.P. Chalasani as its group CEO. Chalasani, who was most recently CEO of engineering and construction company Punj Lloyd, started his career with public sector enterprise NTPC Ltd and went on to head Reliance Power.

Having substantially diluted his stake in the company, Tanti feels there is no need to raise further funds. There are no loan obligations for the next three years, he said. “Today, all my bankers and bondholders are extremely happy," he said. “They passed through the difficult time, but nobody has lost the money; they have gained money."

“The only loser is the promoter. My stake was almost 52%, and now, it is 20%. I had given stock to bankers also when I was not able to pay (obligations)," he added.

But Tanti says he doesn’t dwell on the past anymore.

He doesn’t have big fund-raising plans, but there could be some monetization of manufacturing facilities, which were meant for outdated small turbines. Up for sale will be production units in Puducherry and Vadodara.

The new challenge for Suzlon is also its focus on four key markets—the US, India, Brazil and China. Suzlon has shrunk its presence from 32 to 19 countries, with a CEO for each country. The company also recently appointed a CEO for managing the overall international markets business.

The ups and downs in Suzlon’s story are perhaps best reflected in the company’s stock.

The upside is that more analysts seem positive on the company than negative. Of the five analyst recommendations available on Bloomberg, four had a buy rating on the stock, while only one had a sell call.

For Tanti, that would be reaffirmation of his conviction, that one day Suzlon will once again be the premier wind turbine maker in India.