The Indian financial services sector witnessed $4 billion of investments in the first half of 2018, the highest ever half-yearly investment, following the recent investment by Berkshire Hathaway in Paytm

Mumbai: Non-performing assets (NPAs) and financial frauds in the Indian banking sector have not deterred private equity and venture capital firms from investing in financial services, a report by EY and Indian Private Equity and Venture Capital Association shows. The Indian financial services sector, in fact, witnessed $4 billion of investments in the first half of 2018, the highest ever half-yearly investment, following the recent investment by Warren Buffett’s Berkshire Hathaway in Paytm.

In the first half of 2017, private equity and venture capital firms had invested about $3.2 billion across 53 deals, against the $4.1 billion across 74 deals during the corresponding period in 2018. Overall, private equity and venture capital investments stood at $15.2 billion in the first half of 2018, an increase of 49% from last year. 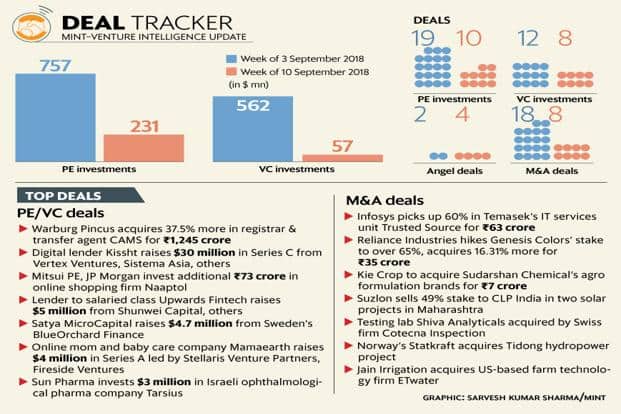 “With a significant section of the Indian population still un-penetrated by financial services, there is a huge growth potential for the financial services industry as the economy continues to grow at a healthy rate of close to 7%. The financial services sector is the fuel to any economy’s growth and should generally grow at 3-4X of its GDP growth rate," the report added.

While public sector banks continue to reel under the burden of high non-performing assets (NPAs), investors have turned to large private sector banks, non-banking financial companies (NBFCs), and alternative banking structures such as small finance banks for deployment of funds, as they continue to eat into the share of state-run banks.

According to the report, investor interest in the sector will be further strengthened with Warren Buffett’s Berkshire Hathaway investing around $400 million in Paytm. Buffett, who had so far refrained from investing in loss-making entities, backed Paytm despite its mounting losses. The investment, according to experts, endorses the potential of the evolving financial services ecosystem in India.

“Globally, investors have realized that payments is a large space, but may not be a significant profit pool because of free services to consumers. However, the payments data can be monetized for adjacent activities such as lending, wealth management, insurance and broking, where the profit pools are extremely significant. The potential for data monetization, given the strong and relevant database of Paytm is attracting the investors," said Niren Shah, managing director, Norwest Venture Partners India.

While Berkshire Hathaway typically doesn’t invest in loss-making companies, Paytm has significantly differentiated itself from its competitor and has a significant headstart, he added.

“Innovation in fintech, especially payments processing, has been on the rise with the increased usage of mobile phones and social media. The ability of fintech to transform delivery channels and credit assessments, through analytics and data, has the potential to transform banking completely," said Abizer Diwanji, partner and national leader, financial services, EY India.

The report further said that larger fintech firms will attract more investor interest and have scope of gaining market share from traditional companies. “The Holy Grail for fintech is to understand what is non-intuitive. This can be done if these firms are allowed to experiment despite losses in order to build a sizeable data base. Paytm can crack the code given that it has a vision," said Shah.

Within financial services, the NBFC sector witnessed maximum activity in terms of deal volumes, led by its ability to customise credit and underwrite small-ticket loans to serve the unbanked and under-banked population. In the first half of 2018 alone, private equity and venture capital firms invested $570 million across 31 deals, against $893 million across 26 deals for the whole of 2017.

“The NBFC sector, which is about 8% of the total market, has attracted the largest private equity funds, mainly because the shareholding in NBFCs is not capped and a significant minority or a controlled transaction is possible. NBFCs have grown well and established their niche over time in segments such as housing, SME and retail, which a majority of the banks have not been able to tap as NBFCs have found innovative delivery and credit scoring mechanisms," Diwanji added.

NBFCs have witnessed a compound annual growth rate of 19% since 2011-12, with MSMEs and microfinance sub-sectors demonstrating a CAGR of 39% and 42%, respectively. Temasek, Apax Partners, Morgan Stanley Private equity and SSG are some of the active investors in NBFCs.