Companies with either significant revenues dependent on the UK or the EU, or presence in the country could be affected if Brexit becomes a reality

Mumbai: Indian companies with significant exposure to the UK and the European Union (EU) risk taking a hit if Britons vote in favour of a “Brexit" in this week’s referendum, analysts warn.

In a 16 June report, CLSA said India’s trade with the UK alone is worth $9 billion, or 8% of that with the EU. Engineering goods and textiles are India’s largest exports to both the EU and the UK and the main imports are machinery and autos.

Also, 25% of India’s $82 billion software exports in FY15 were destined for the EU, with the UK accounting for $10 billion, the CLSA report said.

Britons will vote on Thursday to determine if the UK should stay in the EU or exit the Union. Brexit is a combination of Britain and exit. 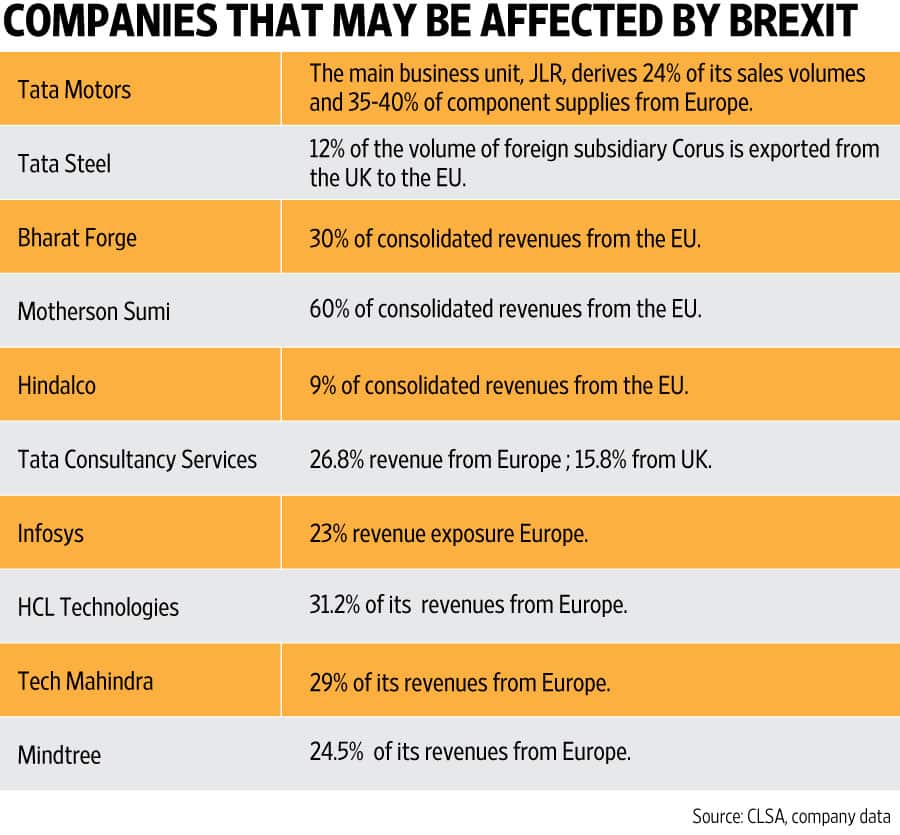 “If Brexit happens, market will go into risk-off mode for some time. Money will move out of riskier assets to safer ones. Our equity market may fall by 2-3%, and the rupee will be hurt too, though it is difficult to estimate the quantum right now," said Sanjeev Prasad, senior executive director and co-head of Kotak Institutional Equities, an arm of Kotak Securities Ltd.

“We saw the Raghuram Rajan impact on the rupee. There will be more outflows if Brexit happens, further pressurising the rupee," said Ravi Sundar Muthukrishnan, co-head of research at ICICI Securities Ltd.

Rajan said on Saturday that he would not seek a second term as governor or the Reserve Bank of India when his tenure ends on 4 September and will return to academia.

In a note on 16 June, CLSA said Indian companies with specific exposures to the EU/UK that risk being hit by Brexit include Tata Motors Ltd, Tata Steel Ltd, Motherson Sumi Systems Ltd and Bharat Forge Ltd.

Britain’s exit from the EU may impact the operations of Jaguar Land Rover Automotive Plc., the UK subsidiary of Tata Motors, Mint reported on Monday, pointing that the subsidiary accounts for 90% profit at Tata Motors.

“Jaguar Land Rover supports continued UK membership of a reformed EU. Access to our customers and suppliers is important to us—any changes could impact our sales, our costs and the skills base," a JLR spokesperson said.

For companies such as Tata Steel, which have operations in the UK, the impact of Brexit could be manifold. Tata Steel has put its UK assets on sale.

“Indian companies in Britain will be impacted and hence have to be watched. Several companies have set up shop in Britain for leveraging not just the local market but also the European markets for which Britain was a base camp. This will mean reworking business plans," Care Ratings Ltd said in a note on Monday.

Twelve per cent of the steel produced in the UK by Tata Steel, which acquired Corus Group Plc. in 2007, is exported to other members of the EU. Those exports may face higher import tariffs with Brexit, and demand would also be hit, CLSA analysts Mahesh Nandurkar, Abhinav Sinha and Alok Srivastava said in a note, adding that higher costs may be partly alleviated by depreciation of the British pound.

Aluminium producer Hindalco Industries Ltd, which earns 9% of consolidated revenue from the EU, is also at risk from Brexit, according to CLSA.

According to Muthukrishnan of ICICI Securities, in the pharmaceutical space, IPCA Laboratories Ltd also has sizeable exposure to the UK in terms of revenue, which could see near-term impact.

India’s largest software services exporter Tata Consultancy Services Ltd (TCS) had 26.8% revenue exposure to Europe and 15.8% to the UK in fiscal year 2015-16, while peer Infosys Ltd had exposure of 23% to the continent.

“For IT companies, the current business flow from UK and Europe may continue even if Brexit happens. But new business orders may be delayed, and subsequently the order growth from the region may be impacted. One impact of Brexit will be the pound which will likely weaken, and will be negative for IT companies having exposure to Britain," said Prasad.