For the same period, the bank’s yield on advances fell to 10.22% from 11.8% in the previous year, but the fall was slower than that of cost of deposits, boosting net profit. 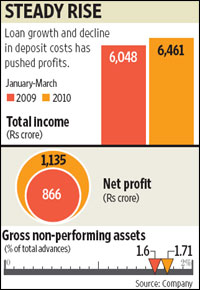 Executive director Nagesh Pydah told Mint that PNB’s operating environment was unlikely to change significantly in the first half of the current fiscal.

PNB’s net interest margin, or the difference between interest earned and interest paid, was 3.57% for 2009-10, higher by five basis points over the previous year. One basis point is one-hundredth of a percentage point.

The net interest margin was bolstered in 2009-10 by an increase in the proportion of low-cost deposits.

The proportion of low-cost current account and savings account deposits increased from the previous year’s 38.83% to 40.85% of the total in 2009-10.

Kamath said the bank will work towards boosting the net interest margin to about 3.50%.