New Delhi: Maruti Suzuki India Ltd, the country’s biggest car maker, is likely to resume production at its Manesar plant in the next two weeks. An announcement to this effect is likely to be made next week, Maruti Suzuki chairman R.C. Bhargava said.

“We should be able to take a call on resuming production very soon. An announcement should be made next week. The details regarding the date, availability and security of workers, supervisors, and other production issues are being worked out," Bhargava said in a phone interview on Friday. Maruti’s other plant at Gurgaon has been functioning normally. 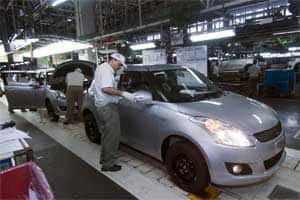 The company has also asked its vendors to be ready to boost production at their plants.

“We have not been told the date, but the company has asked us to gear up for production by next week," said one of two Maruti Suzuki vendors who spoke on condition of anonymity.

The car maker was waiting for the investigation report into the violence, which is expected to be completed by Monday.

The company has also asked its engine and transmission unit Suzuki Powertrain India Ltd to boost production from 20 August.

“The production order for next week has come. We will be continuing with downsized production, but from 20 August, it will be slowly increased to optimum level," said a senior plant official at Suzuki Powertrain, requesting anonymity.

In June, the Maruti Suzuki board approved a proposal to absorb affiliate Suzuki Powertrain in a move that will give it complete control over all its diesel car manufacturing operations. The process is likely to be completed by the end of this year.

Suzuki Powertrain is a 30:70 joint venture between Maruti and its Japanese parent Suzuki Motor Corp.

A senior Maruti Suzuki official said that while the car maker may resume production at Manesar soon, it will face problems in getting workers and supervisors. After the violence, most of the workers went underground fearing arrest. Mint reported on 1 August that Maruti may face resistance from its executives, who are reluctant to return.

“Considering all this, we will only be starting production from Plant B, where the requirement of manpower is minimal," said a company official, requesting anonymity.

Maruti Suzuki has two assembly lines at Manesar, with a third under construction. The plant makes 550,000 vehicles a year, among them the Swift, the DZire, the SX4 and the A-star models. While its first assembly line is 70% automated, the second’s automation level is as high as 95%.

“We will begin with Swift and DZire. While the press and weld of these models will happen at Manesar, the assembly will take place at the Gurgaon plant," said the Maruti Suzuki official. “To begin with,we may be producing around 300 cars per day for the first week."

While the company may have suffered at least ₹ 1,700 crore of revenue loss since 18 July, according to analysts, news of the Manesar plant restarting has been welcomed by analysts.

“If production resumes in another couple of weeks, that would mean it will not have to face any cancellation in bookings," said an analyst with a Mumbai-based brokerage firm. He requested anonymity as he is not authorized to speak to the media. “But they will suffer an Ebitda (earnings before interest, taxes, depreciation and amortization) loss of at least ₹ 70-80 crore, which will impact its September quarter performance. We will have to wait and see how quickly the company can clear its backlog."