For chains such as Domino’s Pizza, McDonald’s, KFC and Pizza Hut, the downturn is no cause for applying the brakes on expansion, as most other industries are doing, but an opportunity to tap new markets and customers. 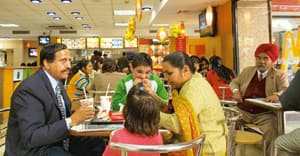 The range already makes up 25% of overall orders and 15-16% of revenue for the chain, which plans to boost sales by launching new advertisements plugging it.

“If we do a good job pushing this, it could cross 30% of overall transactions this summer," says Amritesh, who expects revenue from the range to reach at least one-fifth of the total.

(The promoters of HT Media Ltd, which publishes Mint, and promoters of Domino’s Pizza India Ltd are closely related. The companies have no promoter cross-holding.)

Consumers are skimping and saving as they weather the economic downturn, which has brought with it job losses and salary cuts, and are avoiding lavish dining options and expensive purchases. That’s prompting companies to devise value-for-money deals to drive sales.

Pizza Hut’s Magic Times range now makes up 10% of sales. “This is one reason we’ll be able to grow this year," said Anup Jain, marketing director of Pizza Hut. He said there was a 10% increase in the number of customers at the chain’s restaurants when the range was introduced in October.

KFC and McDonald’s have always sworn by the value-for-money concept.

KFC’s snacks are priced between Rs25 and Rs35. In India, because people often go out to eat in large groups, KFC introduced the Chicken Bucket concept. “The meal bundles, with sides and beverages thrown in, cost about Rs100 per head and are therefore extremely popular," said Unnat Verma, director of marketing at KFC.

Currently, during the downturn, snacks make up 15% of KFC’s sales while another 25-30% comes from the Chicken Bucket.

McDonald’s value meals, that have an entry price of Rs49 going up to Rs119, make up 20% of sales. “We are increasingly looking recession-resistant for our affordability," says Vikram Bakshi, managing director of McDonald’s for the northern and eastern regions.

McDonald’s has seen sales growth of 25-28% every year.

With the value strategy reaping dividends, fast-food chains are working to expand business both in existing markets and newer geographies in a country where eating out is a Rs26,000 crore industry, according to the retail consultancy Technopak. The so-called organized sector that includes chain restaurants makes up just 10% of the pie, and is growing about 20-25% annually.

Domino’s Pizza is trying to dispel the impression that it is a premium brand and expand its customer base. Amritesh says he found a security guard from a neighbourhood shop peeping into a Domino’s outlet, but hesitant to enter. The executive wants workers earning a monthly salary as low as Rs4,000-5,000 to regularly walk in on payday to get a taste of the Rs35 pizza.

Traditionally, taste and a service delivery guarantee of 30 minutes have been the two pillars of Domino’s sales strategy. It has now added a third—value perception. The idea is to make the pizza a product for the masses.

On the back of the value strategy, Dominos increased sales by about 45% year-on-year at the company level (which includes both new stores and existing stores). The same-store growth rate was about 20%. Same-store sales are defined as sales at stores open for at least one calendar year.

Amritesh doesn’t attribute the dip to the economic slowdown. “When you’ve grown for three years at that type of rate, irrespective of what’s going on in the external environment, you expect some of that growth to catch up," he says. “You would expect it to come down a bit."

Pizza Hut, which has been in India for 12 years, is in the process of upgrading its restaurants to provide customers with an enhanced dining experience. “The prices remain the same but what changes is your money’s worth," says Jain. “Now, the service is much better and touchpoints like the crockery you eat out of and the kind of interaction you have with the staff —that’s much better."

In February 2008, Pizza Hut introduced a large variety of menu options at a fixed price for some platinum and gold credit card holders. That now accounts for 7% of its sales.

“I think we will see some sales shifting here," says Jain. “What we’ve seen is that consumers are ordering more because they feel like they are saving money." Fifty per cent of the sales are paid for through credit cards. Pizza Hut has posted 20% year-on-year growth since its entry into the Indian market.

KFC has been growing at a compounded annual growth rate of 65% since it re-launched in 2004 and expects to maintain the pace for the next two years.