India has added 14 names to the list, taking the tally to 111 billionaires, whose combined wealth grew 16% to $308 billion

China-based research firm Hurun’s Global Rich List for 2016 ranked 2,188 billionaires from 68 countries, adding 99 to last year’s list. Their total wealth increased by 9% to $7.3 trillion, which is more than the combined gross domestic product of Germany and the UK and close to half that of the US, said the report.

China, with 568 billionaires, replaced the US (535) as the country with the most billionaires.

India added 14 more names and retained its third position with 111 billionaires, whose combined wealth grew by 16% to $308 billion.

Industrialists such as Reliance Industries Ltd’s chairman Mukesh Ambani, with a fortune of $26 billion, and Dilip Shanghvi, chairman of Sun Pharmaceutical Industries Ltd, with a net worth of $18 billion, were among the top 50 billionaires of the world.

But experts believe the start-up ecosystem, especially Internet companies, will be responsible for spawning more billionaires in the next decade. 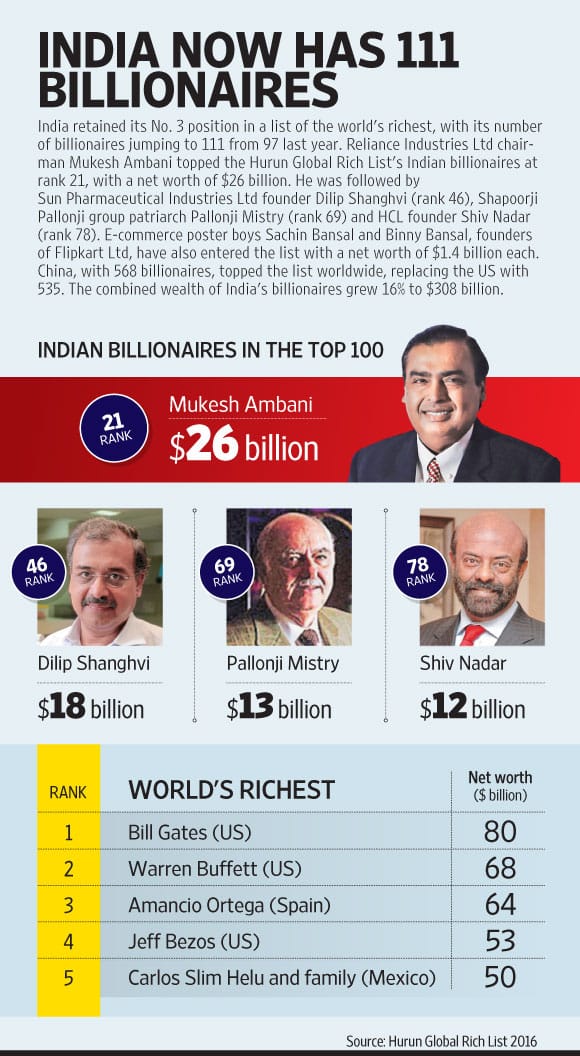 The Bansals, who together have built Flipkart, valued at $15 billion, own a stake of about 16-17% together.

“This kind of wealth is expected when you put together consumer Internet and retail, which are two big industries by themselves and reinventing it," said Abhishek Goyal, founder of start-up data analytics provider Tracxn Technologies Pvt. Ltd.

He expects the tech sector to create the highest number of Indian billionaires this decade. And it is not just the founders, but the investors too, who stand to become billionaires.

“The Internet industry is expected to create a market capitalization of $100 billion over the next 10 years and each fund manager will stand to gain at least $2 to $5 billion in the next decade," said Goyal.

“It is a good signal that new-age entrepreneurs are part of the list. It is a sign of growing entrepreneurship in the country," said Harish HV, partner at consulting firm Grant Thornton India Llp

To be sure, given that the valuation of these companies is not a public valuation, one cannot be 100% certain of the net worth, he added.

Globally, Amazon Inc. founder Jeff Bezos’ net worth rose 83% to $53 billion, making him the fourth richest person, up 18 places from 2015. He replaced Oracle Corp.’s founder Larry Ellison in the list this time.

Technology, media and telecom sectors produced the most billionaires—307—and accounted for 14% of the list.

There were 69 billionaires under the age of 40, and 68% of them were self-made. The youngest billionaire was 25-year-old Evan Spiegel, founder of Snapchat, a video messaging app, who is worth $1.8 billion.

“Despite its own slowdown and falling stock markets, China minted more new billionaires than any other country in the world last year, mainly on the back of new listings. Growth in billionaires for the rest of the world was held back by a slowdown in the global economy, the strengthening of the US dollar and the drop in oil prices. The number of billionaires, however, has jumped 50% since 2013," said Rupert Hoogewerf, chairman and chief researcher of Hurun Report.