Bangalore: Being a networking giant,Cisco Systems Inc. knows how to build the right connections. The firm, which sells hardware, software and services worldwide and had $36.1 billion (Rs1.68 trillion) of revenue in fiscal 2009, has made a series of acquisitions and drafted new partners this year to evade the slowdown in technology spending. 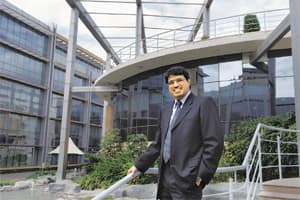 Marking territory: Cisco’s president and country manager for India and Saarc, Naresh B. Wadhwa, says the company is not invading its partners’ turf as it taps new business areas. Hemant Mishra / Mint

But it may have antagonised several major long-term associates in the process.

Nine months ago, Cisco entered the server market, for long the turf of its partners Hewlett-Packard Co. (HP), International Business Machines (IBM) and Dell Inc. Early this year, it acquired Pure Digital Technologies Inc., which sells the popular Flip video camera, thus jumping into the consumer end of the market. This led to speculation it wants to follow Apple Inc., Microsoft Corp. and Google Inc. into the smartphone market as well.

Earlier this month, Cisco acquired video conferencing firm Tandberg, thus putting its existing relationship with RadVision Ltd under a question mark. Its move to form a joint venture with EMC Corp., which owns VMWare, to sell data centre products has made another long-term partner NetApp, which offers similar solutions, uneasy.

Naresh B. Wadhwa, Cisco’s president and country manager for India and Saarc (South Asian Association for Regional Cooperation), which also includes Afghanistan, Bangladesh, Bhutan, Maldives, Nepal, Pakistan and Sri Lanka, talks with Mint about the prudence of these moves as well as the challenges and opportunities for the firm in the Indian market.

Cisco has been in India since 1995 and employs about 5,500 people, a majority of them at its development centre. While it does not provide country-specific revenues, industry magazine Voice and Data estimated Cisco India earned Rs4,693 crore in 2008-09. Edited excerpts:

The last few quarters have been challenging. But your revenue in India this year will be about the same as last year. Is the worst over?

Not just Kerala, covid-19 flaring up in the Northeast as well

In small town India, a shift underway from savings to investments

Can Ajay Singh save SpiceJet a second time?

Overall climate is improving. There are certain sectors that have started investing again for growth and not just for cost optimization. Banks, government and public sector verticals, small and medium enterprises (SMEs) and the financial sector are looking at forward investments.

Telecom is waiting for 3G clarity in terms (of licensing). Once that is there, it is a huge opportunity. Both IT (information technology) services and telecom are more in the wait-and-watch mode. Manufacturing, retail and some other areas are still fairly slow. So in the last one or two quarters, things have been stable and are actually moving up.

In the last six to nine months, you have taken several steps that may have left your partners a little uneasy. Are you invading their turf in quest of growth?

None of the moves we have made have been sudden. While the execution of some of the ideas may have taken place in the recent past, the planning has been happening (for) at least two-three years. John (Chambers, chief executive officer of Cisco) has publicly talked about moving into 30 areas of business adjacencies for us to continue to grow. For instance, the Project Management Systems (PMS) was largely dominated by players like Johnson Controls, Siemens, Honeywell etc, who have been in that market for decades. Our question was how could we offer something better, like we did in the IP (Internet protocol) telephony market.

If not for the innovation that Cisco did in IP telephony seven years ago, a large chunk of the market would not exist. Similarly, our offering (in PMS) is different.

The broader issue I want to address is that we are not doing exactly the same thing as they are, but offering something new, something much more compelling. So I don’t see us treading on anybody’s toes. It (is) possible that they see this from a different point of view.

But there is a fallout. HP acquired 3Com and will push its products rather than those of Cisco in retaliation. IBM will push more of Juniper Networks’s routers than Cisco’s. Isn’t there an impact, even here in the Indian market?

We live in a dynamic world. Our philosophy has been we will never get into a partner’s domain, say, in services. In India, 100% of my business is through partners. We have never gone direct, which is unlike some of the other firms you mentioned. We are a partner ecosystem driven entity.

However, remember network is becoming the platform. We are not going after some of those markets, but some of the markets (are coming to us). What we have entered is market adjacencies.

In the process, if we inadvertently tread (on a partner’s toes), the market will decide the winner. Tough luck for (the incumbents). John is clear that we will catch market transitions. If innovation is not happening by the server vendors, if we can do that (innovation), we will. We have been an innovative player who has caused disruption.

Specific to India, I can tell you that IBM continues to be a solid partner and we have a joint go-to market strategy. Also some of the markets we are targeting are more HP focused rather than IBM focused.

HP’s contribution to our traditional business in the Indian market was not very significant. So their has been no fallout there either.

The Tandberg acquisition is still not (complete), so I will be careful. However, Cisco sees video as clearly being the future of Internet. What form it exactly takes nobody knows, yet.

Cisco today sells everything from a $149 Flip video recorder to multi-million-dollar telepresence solutions. You also launched a video desktop phone. Is the plan to eventually get into the smartphone market?

Video will be a key application which will change the way we work and live. It will be the collaboration engine. Now, how much we get into and what markets we get into, is a continuous discussion, which we keep having. Flip is clearly a consumer device, but whether that will lead us to a smart phone? I don’t know… we keep examining opportunities.

The iPhone and iPod have now added video. So will we go the other way round and add phone capabilities to a Flip? I don’t know. Lots of pieces of the puzzle have to fall in place. It is early days yet.

Will you sell Flip in India?

Yes, eventually, of course. I am eager to do that. We launched in APAC (Asia-Pacific) last month. But is there a timeline (for the India launch)? Again, I don’t know. Maybe in a couple of quarters. I would like to do it at the earliest, but a due process has to be followed.

While you are commonly known as a router company, in India today you get more revenue from switches. What other segments are contributing to Cisco India’s numbers.

Yes, switches contribute about a third to our India revenues, with routers just a little behind. Consulting and services are a growth area for us, where we work with partners like IBM, Wipro (Technologies Ltd), TCS (Tata Consultancy Services Ltd), HCL (Enterprise Ltd), Infosys (Technologies Ltd) and Datacraft.

An interesting trend is that increasingly in the Indian market, partners and customers are taking advantage of the financing being provided by Cisco Capital, which has an overall corpus of $150 million. We have also become the first company in India to be allowed to sell refurbished equipment.

What is the action with Cisco Venture Capital fund in India?

Out of the total corpus of $200 million for venture investments, Cisco has strategically invested close to $100 million so far and expects to utilize the remaining corpus over the next couple of years.

Cisco has made direct investments in Bharti TeleSoft, Indiagames, Nimbus Communications, Real Image, Servion, Secureview, ComViva and Majitek. In terms of indirect investments, Cisco has worked with SAIF (the Softbank Asia Infrastructure Fund), which is a venture capital fund focused on Asia and the Bodhi Fund.

Cisco is sitting on at least $30 billion in cash. It is also known as an acquisition machine. Repatriated profits gets taxed in the US. So are you scanning the Indian marketplace for any acquisitions?

Several acquisitions made by Cisco internationally have a huge India footprint. For example, when we brought Starent Networks (in October) 80-90% of their talent is in Bangalore and Pune. So that (800-1,000 people of Starent) aren’t even included in the current number (of 5,500 employees). Similarly, Tandberg and Scientific Atlanta have India operations.

Cisco had also said that 20% of its global leadership team would be based out of India. What progress have you made on that?

We are pretty much under way in terms of (meeting) that goal. It is an ongoing journey.

What does Cisco India development centre work on?

Initiatives like the smart connected communities are being driven out of the GDC (Global Development Centre). Innovation on safety and security offerings is being done here. Several next generation cloud based services and work in the media and entertainment (vertical).

These are some key areas apart from work on our several existing and future product lines.