Apple may open its own stores in India

Apple may open its own stores in India

New Delhi:Apple Inc. may open its own shops following the Indian government allowing full ownership of single-brand retail stores by foreign companies, according to a senior official of the department of industrial policy and promotion (DIPP).

The maker of the iPad and iPhone has been in discussion with the department for some time and is keen to re-enter Indian market after an earlier bid to do so in 2006, said the official on condition of anonymity. DIPP is the nodal department for foreign direct investment (FDI) policy. 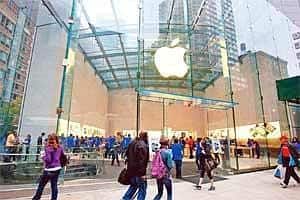 Wide presence: A file photo of an Apple store in New York. The company currently has retail stores across the world, including the US, the UK, Germany, France, China and Japan.

“They have not told us how many stores they will open," the official said. “We have made the policy. The doors are now open."

Apple’s India spokesperson said in an email that the company doesn’t comment on rumours or speculation.

The government last week notified the single-brand retail policy, allowing 100% FDI in single-brand retail trading and consequently set the stage for global retail firms to roll out investments to open fully-owned stores in India. The move freed up the 51% limit that had been in place.

However, proposals involving FDI beyond 51% will have to mandatorily source at least 30% of the total value of the products sold from Indian small industries, village and cottage industries, and artisans and craftsmen.

When asked whether the 30% local sourcing clause will be a hindrance, the DIPP official said, “Let Apple finalize its business plan and the investment it wants to make. If they tell us that the 30% sourcing is a problem, at that stage we will look into it," he said.

The company currently has Apple-owned retail stores across the world, including the US, the UK, Germany, France, China and Japan. Apple doesn’t own any store in India, but has exclusive reselling arrangements with chains such as Imagine and iStore (owned by Reliance Digital). It has a manufacturing base in China, and a research and development centre in the US.

If companies such as Apple open their own retail stores in the country, prices could go down and it could also “up the game in the retail category in the country due to the revolutionary nature of Apple’s retail front end," said Jaideep Mehta, vice-president and country manager of market research firm IDC India.

Apple’s interest in opening stores on its own is understandable as the brand works on this model in several countries, said Saloni Nangia, senior vice-president at retail consultancy Technopak Advisors Pvt. Ltd.