Gadh/Mayapuri/Sardulgarh: Jugaad (verb)—managing to get things done somehow or the other with limited resources.

Jugaad (noun)—a quadricycle, a means of transportation in north India, made of wooden planks and old jeep parts, variously known as kuddukka and pietereda.

It ain’t the Tata Nano but it’s India’s cheapest personalized four-wheeler in more ways than one. 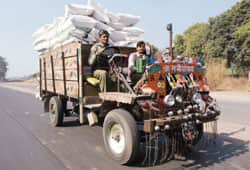 Villagers use the jugaad to ferry goods such as fertilizers, and cane from nearby fields to local sugar factories

A common sight on the pot-holed roads beyond Ghaziabad and near Meerut in western Uttar Pradesh, the jugaad is the lifeline for everyone from sugar cane traders to entire families criss-crossing villages.

Some lucky grooms can get one in dowry too.

Resembling an aggregation of leftover automobile parts, it’s little more than a diesel pump engine strapped on to a rickety wooden quadricycle, with lots of bells and whistles (literally) with the front often painted in garish orange and blues.

Usually, it can be seen carrying up to 35 people, or huge loads of cane from nearby fields to local sugar factories, the rugged precariousness of it is hard to miss.

On a 10km stretch leading to the village of Gadh, this writer counted more than 100 such vehicles, most transporting people. The peak fare is Rs5 for a 15km ride, quite similar to bus fares that were charged say in New Delhi just a decade ago. “I sell about 20 vehicles per month during the marriage season or crop season," says Sunil Kumar, a dealer for these vehicles in Gadh. 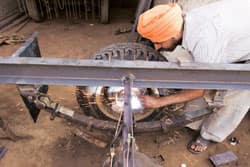 A worker at a jugaad garage. It takes three-four people a little more than two days to put together a jugaad

Not that it’s a lucrative business, complains Kundan, who goes by one name and plys the vehicle on the outskirts of Ghaziabad, noting it’s expensive to operate.

Since it has no insurance, no licence, no pollution-under-control certificate, cops have to be kept at bay for Rs500 per police outpost per month, said another jugaad driver who didn’t want to be named.

The vehicle sells for anywhere from Rs55,000 to Rs90,000 for a top-of-the-line variant sporting branded MRF tyres, a Kirloskar brand engine and the second-hand suspension of a Jonga, a used army jeep.

There is also a second-hand market for these vehicles, with the sticker price depreciating by around Rs8,000-10,000 every year, say some drivers.

Much as it is popular in the roads of western UP, the jugaad’s journey doesn’t quite start in this region. The parts for this ubiquitous vehicle are sourced from Mayapuri, in the heart of western Delhi. Easily the largest old-parts market in this part of north India and the oldest too, underscored by an entrenched smell of petrol and grease on every pillar and rusty roof.

There are around 300 shops in this market that do everything from selling auto parts for vehicles that stopped being manufactured a decade ago to stripping down vehicles and selling them by the kilo as scrap to shops that refit old army jeeps.

The makers of these vehicles are from Punjab, mostly around Ludhiana, said one shopkeeper who didn’t wish to be identified because the market is more or less an illegal one. He wouldn’t provide estimates for how many vehicle parts he sells each month, but admitted that half the stuff was sold by weight.

These parts are then transported to Rajasthan and Punjab and put together in one room garages by three-four people working over two days.

Sardulgarh in Punjab, which borders the state of Haryana, is one such town where these vehicles are made. There are about 15-20 manufacturers of these vehicles in this place. Most people were reluctant to part with information given the illegal nature of the vehicle and following a high court-ordered raid a couple of months ago.

“These vehicles are the lifeline of Sardulgarh," said a person, who has just started a garage for making the jugaads. “All the shops make around 10-12 vehicles every month."

He said that depending on the vehicle, the manufacturer makes a profit of Rs5,500- 8,000, which works out to be a margin of 8-10%. Most of the shops employ three-four workers.

The work is no different from an organized factory shopfloor—almost.

Working in teams of three or four, first they take the pieces of chassis of the Mahindra Jeep and weld it together into a basic frame on to which the wheels are fitted. Then they roll the frame to a winch or pulley of sorts which lifts up the diesel genset that makes up the engine and puts it in place. The steering wheel and transmission are next, followed by the radiator and by now the most important part of the vehicle is ready.

Wooden frames are then mounted and nailed together to make up the passenger carrying space while a fuel tank is strapped on.

The finishing touches are painting the front fender, which is basically a sheet of metal and parts of the rear portion of the vehicle. The more adventurous and—wealthy—garnish their vehicles with little bells and chains and other trinkets.

Once done, the vehicle is usually driven to those borders of UP or Bihar, where security is lax, by a driver who is paid Rs800 to scurry the noisy machines through.

At these places, the buyers’ representative collects them. And soon, another jugaad has just joined India’s transport revolution.

Jugaad, a four-wheeled, often garishly painted contraption, is a means of daily transport for villagers in rural UP and Punjab.

These unlicensed and unregistered vehicles are cobbled together with used jeep parts.

The vehicles, or kuddukkas, as they are known locally, are manufactured in small workshops in areas around Ludhiana in Punjab.

The front of a jugaad, which is basically a sheet of metal, and parts of the rear portion are often painted orange and blue. Some are decorated with bells and chains.

A view of the driver’s seat.

A jugaad can usually be seen carrying up to 35 people.