Maoists, mafia, MLAs and moneylenders: they are external, extortionist threats

Maoists, mafia, MLAs and moneylenders: they are external, extortionist threats

New Delhi: Vikram Akula, chairman of SKS Microfinance Ltd, is arguably the most controversial figure in India’s nascent microfinance industry. As SKS’ initial public offering (IPO) approaches, the first among microfinance companies, Akula spoke in an interview about his unabashed support for a commercial approach to the business of lending to the poor and the challenges faced. Edited excerpts:

Your IPO has stirred a hornet’s nest. Will the advent of large-scale private capital into microfinance compromise its goals? 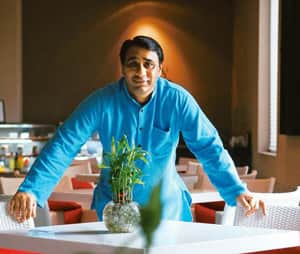 Making things easy: SKS’ Akula says the poor are very comfortable with the 28% interest charged by the NBFC because the loan comes on time and is delivered at their doorstep.Pradeep Gaur/Mint

The only way to get commercial capital is to be not just profitable, but extremely profitable. The perception is, on the part of the investor, this is unsecured lending to poor women. That is what we have tried to deal with.

In 2005, we converted into an NBFC (non-banking financial company) and our goal is to be extremely profitable because that is the best way to bring most capital to the most poor. Today, we have 6.8 million clients and we have done that in about a third of the time as the Grameen Bank (founded by Yunus).

This is no disrespect to the Grameen Bank, but this is to say the commercial approach is what a new generation of microfinance has brought to the industry—the ability to raise capital and overcome the capital constraints in a way the social business model is not able to do. That is why we are doing the IPO as well.

Without an easy deposit-taking regime, your intermediation costs are high. The poor borrow at high rates. Do you see this easing?

RBI (Reserve Bank of India) is reluctant to have NBFCs take deposits. This has nothing to do with MFIs (microfinance institutions), this has to do with a horrible legacy NBFCs have left, and we got caught in the crossfire. What we say to the RBI is give us the opportunity to take deposits from the poor; yes, it will help us, but more because it is a critical thing for the poor to have a place to save.

Imagine living on Rs50 a day. If you don’t have a safe place to save, you have to resort to putting money in a matka (jar), hiding it in the folds of your sari or buying goats—the most liquid asset the poor have.

What have we done? We have created a nation of goat keepers because we have not given the poor a safe place to save. If you did that to the middle class, this country would be in revolt. Why do we get away with doing it to the poor? What we say to the RBI is there are elegant ways to make a distinction between MFI NBFCs and other NBFCs.

It is true financing costs are high because we don’t take deposits. On average, it might be 11-12%. But what is more important here is operating costs overwhelm financing cost because it is a high-touch business. Our 23,000 staff visit the doorstep of 6.8 million women every single week. We do it because it is the best thing for the poor. But as a result of that you get high cost.

Despite the cost, over time you get economies of scale and you do reduce interest rates. We charge 28%, but we have reduced it twice since we have become an NBFC. At 28%, we are among the lowest cost financing for the poor. If you consider the full transaction cost, what a World Bank (study) did was to ask borrowers, “You get subsidized lending from the banks’ scheme and so on; what are your transaction costs? How many trips do you have to make to get a bank loan? What are your lost wages, bus fares, food, brokers’ fees, the bribes that you pay?" The poor themselves have said, “The subsidized loan costs us much more than microfinance loan." So, the poor are very comfortable with 28% because the loan comes on time and is delivered at their doorstep.

Moving to your Microfinance Institutions Network’s recent code of conduct, what you seem to have created is a cosy, closed club which has erected entry barriers.

Though increased competition is good for the poor, we know that many of the newer MFIs don’t necessarily follow the rigorous group formation process and as a result the loan approval process that the traditional MFIs do. Instead, they treat it more as a bank might lend to someone. In the absence of a credit bureau, we felt that it was prudent to limit the numbers of MFIs that can lend to a poor household and limit the amount to Rs50,000 so that inadvertently some borrowers don’t get into a situation where they are over-leveraged. It is a good proactive move to protect the health of the industry.

Now, if the MFIs use the rigorous group process, you don’t need the cap because in some ways the group itself would prevent that happening.

We stagger groups (formation). It means in any 50-week period, someone is waiting for a loan. If the repayment doesn’t come in on that day, the loan doesn’t get disbursed. That person is going to pressure (the) one who is defaulting, or if there is genuine defaulting, help her out. If you have this strong group system, you don’t need a code of conduct.

The flip side being it also creates entry barriers

Yes and no. The way the conduct is designed is that you can’t be the fourth MFI lender. But if someone (borrower) wants to exit MFI 3 and then join you, you can. Presumably, price competition, product competition, will take place because of that. My personal view is competition is the best thing for any consumer.

Does SKS have more delinquencies in new branches than in the older branches?

State-wise, the portfolio quality doesn’t vary systematically by maturity. In fact, even the spikes are relatively small. Every spike can be explained by some external challenge. Any portfolio at risk, I can explain with four words: Maoists, mafia, MLAs (lawmakers) and moneylenders. They are external, extortionist threats of one form or the other.

If you are not paying extortion (money), you are physically prevented from coming into the centre. And eventually, the borrowers will check that. But it takes them time to go to the Maoists and say, “Please leave us alone, this works for us." MLAs—I say that as a proxy for the political apparatus—if you don’t give their cut, they do interfere. It takes a little while till they realize we are never going to pay. Once they do, they stop interfering.

We work in 334 districts across the country. We definitely get asked for extortion (money) from all sources and we say no to all sources.