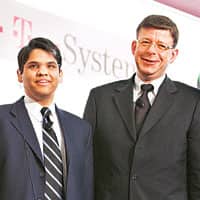 IT partners: Francisco D’Souza (left), CEO of Cognizant, with Reinhard Clemens, CEO of T-Systems, at the CeBIT fair in Hannover, Germany.

R. Chandrasekaran, president of Cognizant, said the alliance would help the firm gain access to key sectors such as automotive and telecommunications, where T-Systems is strong, besides enhancing its capabilities in the German market and providing access to large European customers.

Europe has been on a high growth trajectory for Cognizant from where it earned about 18% of its revenues in the December quarter, up from 13% in the March 2007 quarter.

“In addition to the immediate offshore revenues from the rebadging of the T-Systems India employees, we expect the partnership to generate at least $40 million (Rs161 crore) in the first year of partnership," Chandrasekaran said.

Indian firms are looking to grow their business outside the US, as the largest IT services market heads into a recession.

Late last year, Satyam partnered with Arvato Systems, the IT division of Bertelsmann Group, to offer services and solutions to companies in Germany, Switzerland and Austria. Satyam planned to target the small and medium enterprises, which dominate the German economy, through its Arvato partnership, while selling directly to larger firms.

Recently, Infosys tied up with Nihon Unisys Ltd to jointly sell its solutions in the Japanese market.