There may still be hope for authors and publishers from India and elsewhere standing against US-based Google Inc.’s plan to digitize millions of books and put them online for search and sale. 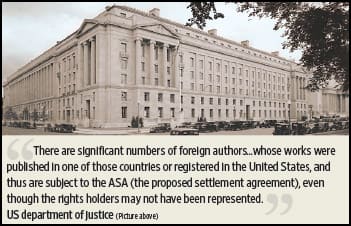 In its Friday submission, the department told the court the US government “believes that the court lacks authority" to approve a proposed settlement agreement, as it involved the rights of many foreign copyright owners too.

The department also found fault with the “opt-out" clause of the proposed settlement, under which rights holders worldwide who did not “decline" to participate in the project by a 28 January deadline become automatically bound by the terms of agreement.

The department’s submission has been cautiously welcomed by Siddharth Arya, legal counsel for Indian Reprographics Rights Organization (IRRO)—a not-for-profit group set up in 2000 by the Authors Guild of India and the Federation of Indian Publishers for representing Indian copyright holders abroad.

The department’s submission acknowledged the proposal would give Google sweeping rights to books written by not just American but foreign authors as well. It said these authors may not have been adequately represented in the court, and thus did not have the chance to participate in the negotiations.

“…there are significant numbers of foreign authors from outside Canada, the UK, and Australia whose works were published in one of those countries or registered in the United States, and thus are subject to the ASA (the proposed settlement agreement), even though the rights holders may not have been represented," the department said.

Slamming the “opt-out" clause in the settlement agreement, the department suggested an alternative “opt-in" clause. Under this, publishers and authors interested in the project could enter into an agreement with Google and have the works owned by them digitized.

“A few people in the US are planning to discuss and decide for the whole world. That is just not acceptable," said Arya. He added that nobody could decide on the behalf of copyright owners, let alone without informing them, about the use of their copyrighted works.

IRRO had filed its objections in the US court on 28 January. Its submission had contended that “Illegal copying of literary works, in clear violation of rights guaranteed by International Treaties and Indian Copyright Act 1957" and “secret negotiations conducted by a few US-based publishers on behalf of thousands of authors and publishers worldwide" were not fair.

Giving the example of Amazon.com—which spent eight years negotiating bilateral deals with copyright owners before digitizing about three million books—Arya said the only acceptable offer was for Google to individually speak to copyright holders or their representatives to secure the rights to books before digitizing them.