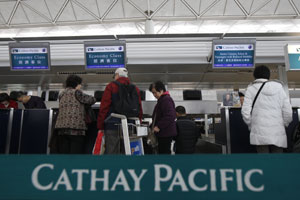 The global airline industry is grappling with economic uncertainty in Europe and the US that has weighed on passenger and cargo traffic, and hurt some of the big players such as Cathay’s regional rival Singapore Airlines Ltd.

“Demand for cargo shipments from our two main markets, Hong Kong and Shanghai, remained weak for most of the first half of 2012. The situation was exacerbated by strong competition. Demand was particularly weak on routes to Europe," the company said in a statement.

It said it expected the cargo market to improve, but did not provide a timeframe.

Industry executives and economic analysts generally see airline cargo traffic as a leading indicator of the airline business as a whole, as well as an overall reflection of global trade.

Cathay, which also competes with Australia’s Qantas Airways Ltd, reported a net loss of HK$935 million ($120.6 million) for the six months ended June, underlining how sagging demand and high oil prices are taking their toll on the industry.

The loss was Cathay’s worst for a first-half period since the outbreak of severe acute respiratory syndrome hit the city in 2003, when it posted a first-half loss of HK$1.24 billion.

“It’s worse than expected and the market probably will take it negatively," said Tim Bacchus, an analyst with CCB International Securities.

The earnings lagged an average forecast of a HK$122.5 million profit from six analysts polled by Reuters and compared with a profit of HK$2.81 billion ($359.9 million) for the same period a year earlier.

Fuel costs rose 6.5% from a year earlier and accounted for about 42% of the carrier’s total operating costs. Aircraft maintenance expenses rose 23%.

Cathay said premium class yields remained under pressure in the first half and it highlighted a drop in demand for corporate travel from Hong Kong.

Cathay, which has a market value of $6.6 billion, flagged disappointing interim earnings in May amid high jet fuel prices, weak cargo demand and increasing competition.

Singapore Airlines, the world’s second largest carrier by market value, said in July it swung to a profit in the second quarter, but warned that earnings at its cargo and passenger units remained under pressure.

Cathay’s cargo unit, which accounted for 24% of revenue, shipped 10% less freight in the first six months of the year due to weak demand in its key markets, including Hong Kong and China, as a global economic slowdown cut consumer demand for electronics and other manufactured goods from Asia.

The outlook for exports in China, the world’s second-largest economy, remains shaky with Europe gripped by recession and economic recovery remaining patchy in the US, analysts said.

Passenger traffic at Cathay, which is 45% held by Swire Pacific Ltd and about 30% owned by Air China Ltd, rose 8.6% in the first half, although the company remained under pressure from competition from Middle Eastern carriers and budget carriers.

Cathay Pacific shares slide more than 7% on Wednesday after the company reported loss.

They have underperformed the blue-chip Hang Seng Index, which has risen 8.8% so far this year. Reuters