Profitability remains elusive for consumer internet start-ups in India, with little evidence that months of cost-cutting amid a funding slowdown has borne fruit.

An analysis of the earnings reports of 43 consumer internet companies showed cumulative losses of more than Rs19,200 crore on revenues of Rs26,090 crore for the fiscal year ended 31 March 2017. Together, losses for these 43 start-ups rose by 27% from 2015-16 and revenues increased by 26% in the same period. Mint sourced the financial reports of the companies from Tofler and the Registrar of Companies. 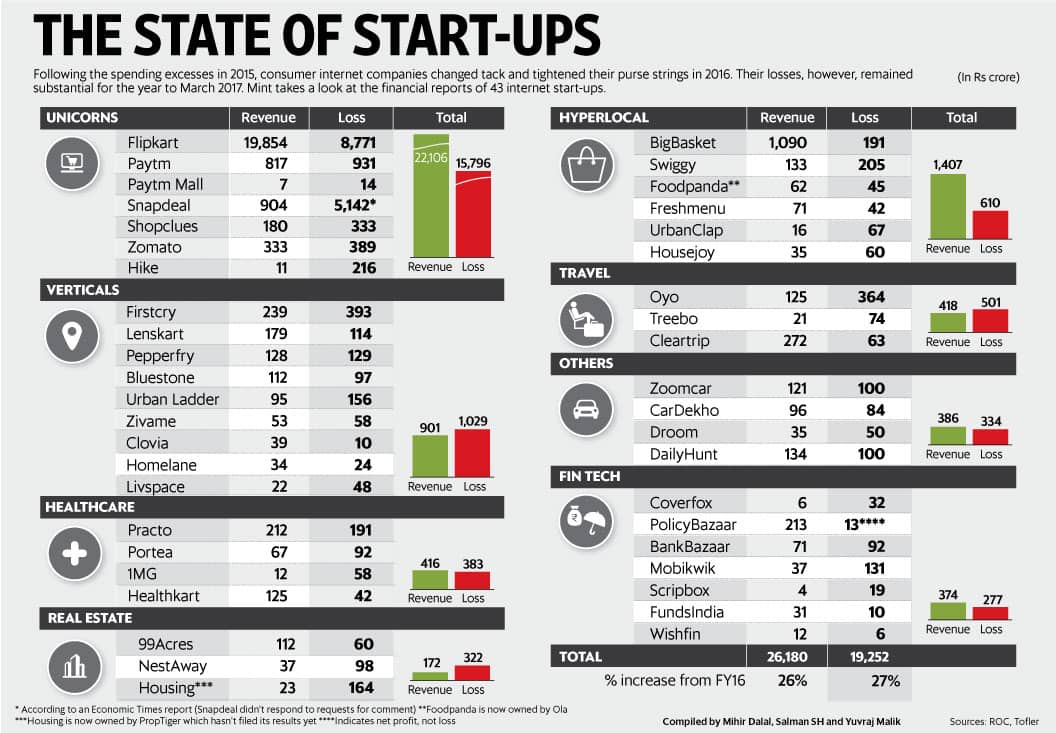 After an 18-month-long boom, funding has slowed for consumer internet start-ups since the end of 2015. Losses ballooned out of control in the boom years as start-ups spent freely on discounts and advertising but the spending didn’t yield sufficient revenues, prompting investors to force start-ups to cut costs.

But the financials of the 43 start-ups reveal that the consumer internet economy is still on shaky ground and confirm the fact that most start-ups still rely heavily on discounts to drive sales. The latest numbers indicate that start-ups will need external funding for years to come. (All of the 43 start-ups have raised at least $10 million in capital, and most of them have raised much more.)

Only one company, insurance retailer PolicyBazaar, eked out a profit in 2016-17. Policybazaar, which raised roughly $75 million at a valuation of $500 million from new and existing investors in October, was the standout performer in the consumer internet pack.

The company nearly doubled revenue in fiscal 2017, helped by the fast expansion of its new business Paisa Bazaar, a marketplace for consumer loans, mutual funds and other products. It has said it wants to go public by the end of 2018.

For some others, including online marketplace Flipkart, India’s most valuable start-up, revenue growth slowed. Losses at some companies rose at a faster pace than revenues despite efforts to cut costs.

The combined valuations of Flipkart ($14 billion) and digital payments firm Paytm ($11 billion, including the marketplace business) account for more than 65% of the cumulative valuation of the 43 start-ups, according to Mint research.

Two unicorns, or start-ups valued at $1 billion or more, cab-hailing service Ola and classifieds Quikr, haven’t filed their financial results for 2016-17. Some others such as grocery ordering app Grofers, fashion retailers Limeroad and Voonik and ticketing service Bookmyshow, which was the only consumer internet start-up to turn in a profit in 2015-16, are also to report their earnings.

To be sure, there are clear signs of improvement at some companies. For instance, at five large start-ups—Zomato, BigBasket, Swiggy, Oyo and Lenskart—revenues rose at a faster rate than losses. Others such as furniture retailers Pepperfry and UrbanLadder reported that losses narrowed.

Additionally, the valuations of some start-ups, including Flipkart and Zomato, have either declined or mostly remain unchanged from their peak valuations in 2015. This indicates that the gap between their valuations and financial performance is narrowing, albeit at a slower pace than what investors expected.

The financials of payments firm Paytm in 2016-17 aren’t comparable to the previous fiscal year partly because of a restructuring exercise that resulted in a spin-off of the company’s e-commerce business. Paytm’s results include those of Paytm Payments Bank, a separate entity.