Mumbai: You are at a hyper market selecting wheat, ragi and soya that you want processed into multi-grain flour, and some of this kneaded into dough for chapatis. Or you want your vegetables cut and diced or even cooked, at no additional cost.

Customized services like these will be the next driver of growth at Big Bazaar and Food Bazaar, the value department and hypermarket chains of the country’s largest listed retailer Pantaloon Retail (India) Ltd, said Sadashiv Nayak, chief executive of Big Bazaar.

Big Bazaar launched the concept, Seva, in March in a new store in Bangalore’s Rajajinagar that it calls a family centre. “Seva is now ready to be rolled out nationally," said Nayak. 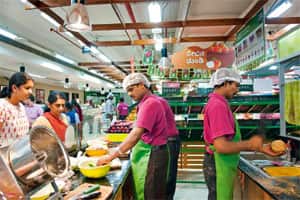 With these larger stores, the retailer is looking to offer “beyond catering to essentials roti, kapada and makaan (food, clothing and shelter) needs to get a larger share of the customer’s wallet," said Nayak. Seva will also provide services such as payment of utility bills to customers.

Big Bazaar accounts for 9 million sq. ft of Pantaloon’s total retail footprint of 16.5 million sq. ft of stores. The format accounted for about 60% of the company’s revenue of ₹ 12,212 crore in the financial year ended June 2011 according to the latest available figures.

In April, the group sold a majority stake in its flagship Pantaloon departmental stores to Aditya Birla Nuvo Ltd to help reduce the ₹ 5,800 crore debt it had in December in its core retail business. Its focus is now on driving its food and fashion businesses.

Sadashiv Nayak talks about Big Bazaar’s “Seva" initiative and how it could help the retail chain.

Food and groceries account for 40% of Big Bazaar’s revenue, whereas fashion and apparel make up for about 30% of the overall revenue.

The remaining 30% comes from the other units such as electronics.

In June, for the first time, the retailer hired an advertising agency and did an outdoor and print campaign for driving sales at its Fashion @ Big Bazaar apparel unit.

For Seva, it is in talks to outsource the running of a centralized kitchen as it looks to offer freshly prepared curries, vegetables and dessert, said Nayak.

To be sure, the retailer has in the past offered some services such as flour mills at some Big Bazaar stores. In 2010, it also took on board experts on Indian mythology and religion to understand the varied Indian communities and their customs and preferences.

“With Seva we are now taking a leap," said Nayak, who has taken insights from corner shop retailers in the interiors of India who offer free coriander, chillies or curry leaves when shopping for vegetables.

“The cost of offering a service is not much. However, the perception it brings of flexibility would be a huge driver for customer stickiness. It helps in building loyalty and differentiation," said Abhishek Malhotra, partner at consulting firm Booz and Co Inc.

Besides differentiation, such services can become an additional stream of revenue, said Pankaj Gupta, practice head, consumer and retail, Tata Strategic Management Group. “It makes sense to add service to a product line. They create a differentiation and provide a benefit to the customer. If done well they can be developed into an additional revenue stream over a period of time," he said.

Other retailers like Shoppers Stop Ltd, which runs a department store of the same name and hypermarket chain HyperCity, and Reliance Retail, an arm of India’s most valuable company Reliance Industries Ltd, are also experimenting with their loss-making hypermarket business models.

Likewise, in December, Reliance Retail, which has formats like Reliance Mart and Reliance Fresh in the hypermarket and neighbourhood grocery formats, merged nine companies that handled varied back-end operations into its subsidiary Reliance Fresh.

The Indian retail market is estimated to be $505 billion this year, of which organized retail is about 6.5% of the total market, according to Technopak Advisors, a Gurgaon-based retail consultancy.