Duncan Edwards | We are still talking about Cosmo in Hindi

Duncan Edwards | We are still talking about Cosmo in Hindi

New Delhi: Media company Hearst Magazines International, publisher of Cosmopolitan magazine, has an India presence through a pact with the India Today Group that also publishes the Harper’s Bazaar and Good Housekeeping titles. Duncan Edwards, president and CEO of Hearst Magazines International, a unit of Hearst Corp., spoke in an interview about the company’s India plans and the €651 million (Rs 4,505 crore) deal with French media group Lagardere that gives Hearst the right to publish Elle outside France. 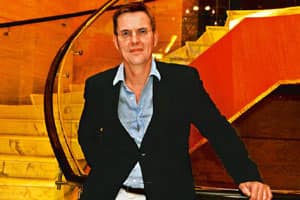 Market attraction: Edwards says to ignore India would be crazy as the potential of the market is enormous. By Satish Kaushik/Mint

Are you looking to launch vernacular editions of your English titles in India?

The attractive thing about this market is that there is a reading tradition. Not every market has a culture of reading. The newspaper market is so strong and interesting still, which means there is still a good basis for a magazine business here. So far we have only been active in the English language. I’d be very interested in trying to publish in the vernacular medium. Cosmo Hindi has not happened yet, but we are still talking about it.

Are you eyeing small-scale joint ventures or acquisitions in the near future?

Small-scale ventures, possibly. Most of our attention at the moment is on the consequences of our big transaction earlier this year (with French media group Lagardere). There’s a lot of work we have to do in terms of managing that and integrating it to get it in good shape.

You successfully translated television content into glossy magazines in the US with the Food Network and iconic talk show host Oprah Winfrey and more recently with design channel HGTV. Would you consider replicating the US model here?

We have been lucky or skilful, whichever you want to say, because Oprah is a dream and proved to be a great hook to hang a magazine on. Food Network magazine was a big bet that we took in the middle of a recession and it’s turned out to be a fantastic hit. I would be interested to know who would be the biggest personality on television in India to do a magazine on. We have not really discussed it. But it would be something I would be very interested in.

Experts say another global financial slowdown may be in the offing. Will this affect your business as the 2008-09 financial crisis did?

I hope not. Clearly, 2009 was a huge problem for all media companies (because of the 2008 financial slowdown) and we can ill afford a similar impact on our business, particularly in Europe. But we know what we have to do if we have the same kind of crisis. We have to radically look at the structure of the companies, eliminate cost and try and protect the business, survive and then come back and re-build it.

What about opportunities in the developing Asian markets? Will we see Hearst enter new niche spaces?

To be honest, I would much rather not (enter new niche segments). I’d like to remain in much larger markets. They (developing markets) all have different characteristics. To ignore India would be crazy because the size and potential of the market is enormous. I guess the challenge for the Indian market is how to get bigger circulation for these magazines.

Are you looking to launch more titles in developing markets?

We are looking to launch more magazines all the time. So in the last two years we have launched in Armenia, Mongolia, Kazakhstan and the Middle East. But our biggest markets outside the US are countries such as the UK, Russia, Spain, Italy and China. So there is a mixture of old, mature markets and developing markets (that contribute to 40% of the magazine business). India accounts for a very small part of the revenues, but we expect it to grow.

Overall, maybe 15% of the profitability comes from developing markets right now. The growth rates for those markets is somewhere around 10% a year minimum. So it’s going to be a big market.

You were launching editions in 2009—can you still do that?

I think you can still do that. The 2009 crisis did not affect everyone the same way. There were some markets, which were affected much worse than others. Eastern Europe for example was difficult. But Asia didn’t seem to miss a beat. Western Europe, North America, Russia, Eastern Europe were big problems.

Vidhi Choudhary in Delhi contributed to this interview.