New Delhi: Debt-laden clothes seller Koutons Retail India Ltd is facing at least four lawsuits, of which two are winding-up petitions filed in the Delhi high court by its suppliers to recover dues. 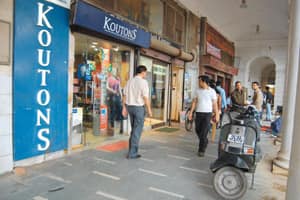 Another winding-up petition was earlier filed by RC Velvet, a supplier of corduroy fabric based in Gurgaon near New Delhi. Fortunex Ltd, headquartered in Hong Kong with facilities in Dhaka, Bangladesh, has also moved court to recover dues.

A person familiar with the Berry Cotts lawsuit said the firm was trying to recover more than Rs10 crore for supplies to the retailer.

A Berry employee said his firm stopped all supplies to Koutons three months ago. Both executives asked not to be named since the matter is in the court.

A person with direct knowledge of the issues between Koutons and RC Velvet confirmed filing a winding-up petition but declined to give details on the company’s outstandings against Koutons. He, too, requested anonymity.

In an earlier email, Ajay Mahajan, chief financial officer at Koutons, said his firm had never conducted any business with Fortunex in the past year.

However, in a recent email he said Koutons once procured supplies from Fortunex and had already made a payment of Rs34.3 lakh. “We have not received any of the containers for which we have already made the payment," he said.

Meanwhile, Pankaj Kumar, head of finance at Fortunex, said it’s the only payment the company has made even as it is still to recover remaining dues. “The consignment for which Koutons has paid is lying in Delhi where the company has not taken its delivery."

Navneet Bhagat, managing director of Fortunex, which also supplies to Wal-Mart Stores Inc. and JC Penny Co. Inc., said it is trying to recover dues worth $1.2 million (Rs5.30 crore) for supplies made over 2008 and 2009.

In two separate emails, Mahajan said Koutons had reached agreements with Berry Cotts and RC Velvet and that the companies would not take legal action against them.

Mahajan also said his company has not received any legal notice regarding any lawsuit from Fortunex.

Anil Jain, managing director of RC Velvet, however, said the suit was still in the Delhi high court even though “negotiations" with Koutons were ongoing.

A lawyer involved in one of the filings against Koutons said his firm is currently in the process of filing at least four more recovery cases against Koutons in the coming weeks from various other vendors. He requuested that neither he nor his client be named.

Koutons is the latest in the line of modern Indian retailers, including discount store operators such as Subhiksha Trading Services Ltd, Vishal Retail Ltd and the India franchisee of US-based My Dollar Store Inc., that are facing cash problems.

Defunct Subhiksha is facing several winding-up petitions in the Madras high court after a financial crunch stalled operations of the once aggressive supermarket chain.

Koutons, which operates about 1,300 company-owned and franchisee apparel stores across India, went public in 2007 and its investors voted with their wallets, pushing its share up 42% on debut to Rs590. But lately the company’s stock has fallen.

Koutons came under the spotlight after three of its directors quit the company in the past three months.

A late September downgrade to risk-prone credit status by rating agency ICRA Ltd added to Koutons’ woes as its stock crashed 20% in a single day to close at Rs172.