New Delhi: Tata Consultancy Services Ltd (TCS) kicked off the fiscal first-quarter earnings season by reporting its fastest sequential growth in four years, as the largest banks in the US boosted spending on technology.

TCS last reported a 4.8% constant-currency revenue growth in the fiscal first quarter of 2014-15.

Net profit rose 1.1% to $1.08 billion in the June quarter from $1.07 billion in the preceding three months, while operating margin narrowed 40 basis points to 25% from 25.4% in the January-March period. 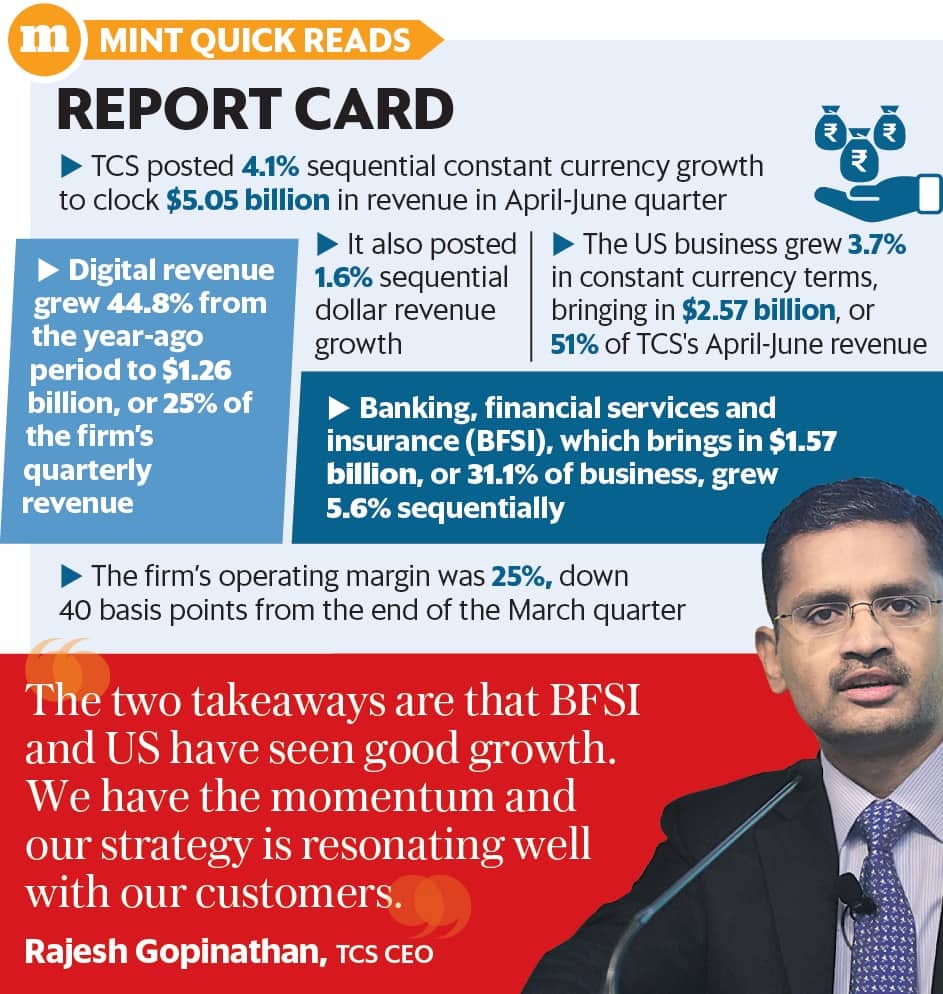 The US, which accounted for 51% of TCS’s June quarter revenue, and financial services, which constituted 31% of overall business, grew 3.7% each.

A strong performance by digital, which grew 45% from a year earlier to account for 25% of the firm’s quarterly revenue, means the company’s strategy of building both talent and technologies is beginning to yield results.

“Both revenue and margins beat CS (Credit Suisse) and consensus estimates," Anantha Narayan and Nitin Jain of Credit Suisse wrote in a note to investors after TCS reported its earnings. “Sequentially, BFSI (banking, financial services and insurance) vertical grew at 3.7% QoQ, the best since the last 7 quarters."

TCS does not give quarterly or annual forecasts but a strong start to the financial year reaffirms the management’s optimism on the company reporting double-digit growth in the current financial year.

“The two takeaways are that BFSI and US have seen good growth. We have the momentum and our strategy is resonating well with our customers. We are enthused with what we see and this sets us up well for the year," said TCS CEO Rajesh Gopinathan.

“We, the entire management team, have said that we are looking at a double-digit growth in the current fiscal, and we believe we are headed there," he added.

“We expect a positive reaction (from investors) given strong Q1 numbers and positive commentary," UBS’s analyst Diviya Nagarajan wrote in a note to clients after the company declared its earnings.