Following the grounding of A320Neo aircraft in their fleets due to an engine problem, IndiGo and GoAir on Thursday released a list of 41 routes on which they have cancelled flights for the next two weeks. How this affects travellers on each route will, in theory, depend on the share of the airline on that route and the extent of the cutback.

To work out an approximate impact on each of these 41 routes, we used data from the “winter schedule" submitted by each airline to the civil aviation regulator in late-2017 (applicable till 24 March 2018) to compute the total weekly seats on each route. Next, we looked at flight information on makemytrip.com to check for instances of airlines adding capacity since submitting their winter schedules. In both instances, we considered only direct flights. From this total, we subtracted the cancellations by the two airlines to arrive at the net capacity impact on each route. 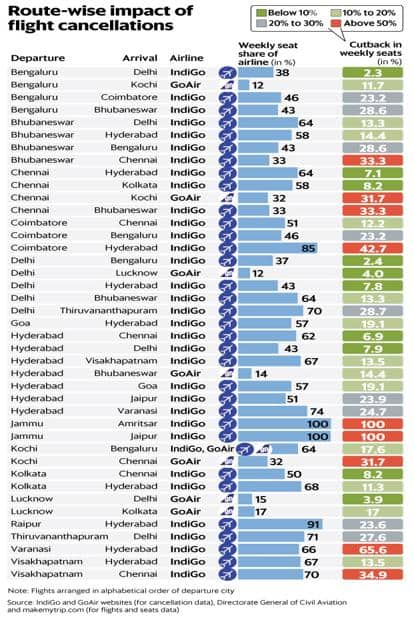