Flipkart marginally ahead of Amazon, while Snapdeal comes in a distant third, based on the RedSeer E-tailing Leadership Index

Bengaluru: Flipkart is still India’s most popular e-commerce brand, though arch-rival Amazon India is nipping at its heels after racing past Snapdeal in the quarter ended March, a survey found.

According to the RedSeer E-tailing Leadership Index (ELI), Flipkart with a score of 91 was marginally ahead of Amazon at 87, while Snapdeal came in a distant third at 60. The index, which will be published on a quarterly basis in Mint, is compiled by research and advisory firm RedSeer Management Consulting, which specializes in e-commerce market research.

RedSeer surveyed some 3,000 online shoppers in 30 cities, tracking prices of more than 600 mobile phones across India’s top five e-commerce firms, which include Paytm and Shopclues.

The survey considered three broad metrics: trust in a brand; product assortment and prices; and the overall buying experience in terms of ease of using the e-commerce platform, delivery speed/consistency of orders and ease of product returns or cancellations. After weighing all of these factors, an overall score was assigned to each firm. 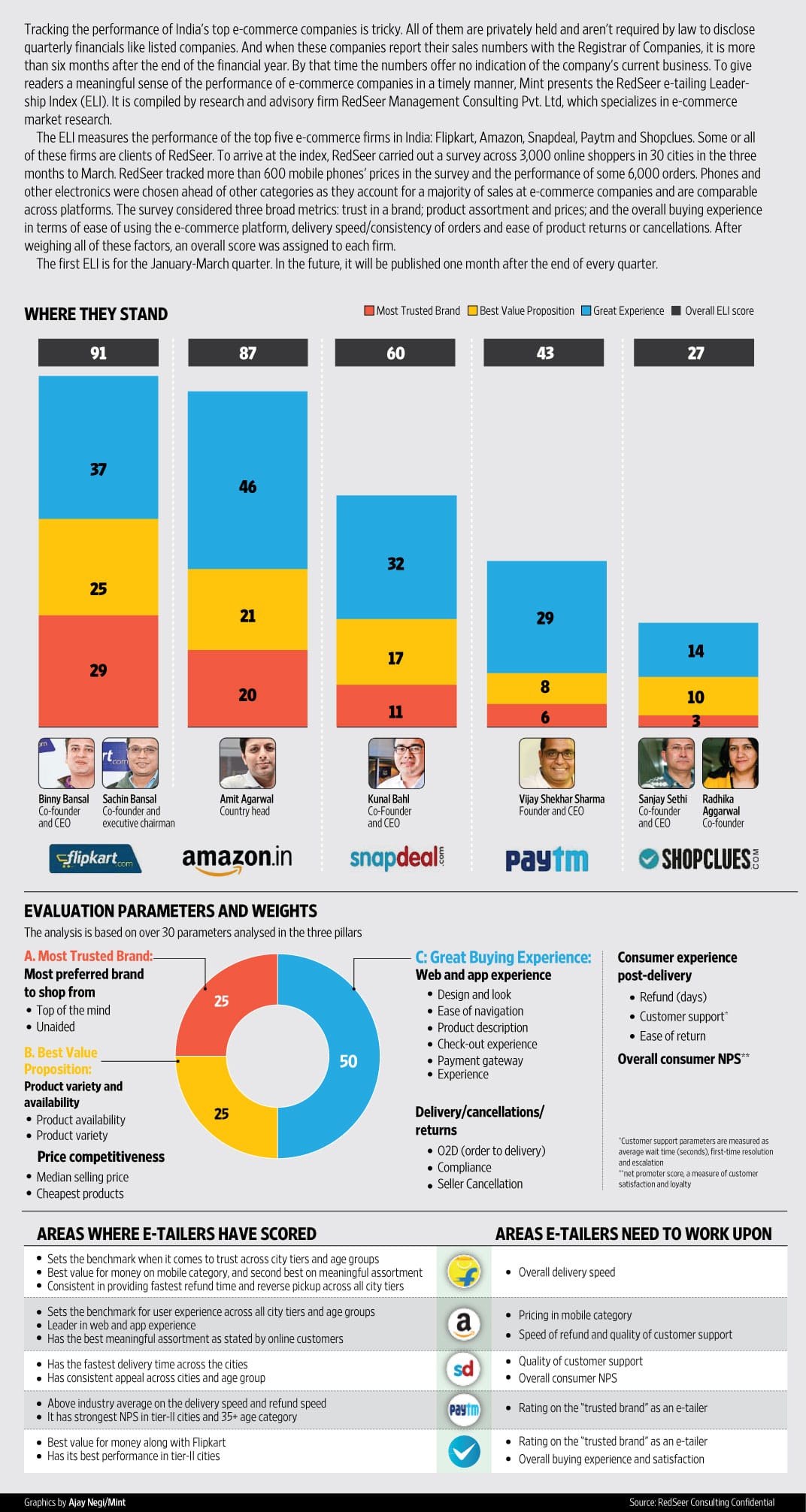 The index reflects reports in Mint and other publications over the past six months.

Though exact market share numbers are unavailable, Amazon is neck-and-neck with Flipkart and Snapdeal in the ongoing race at the top of India’s e-commerce market which was worth an annualized $13 billion in the month of March, according to RedSeer. Amazon launched in India only in June 2013, years after Flipkart (2007) and Snapdeal (2010). Yet, Flipkart and Snapdeal are faced with the strong possibility that they may be overtaken by Amazon.

Mint had first reported on 15 August 2015 that Amazon India was gaining significant market share from Flipkart and Snapdeal. At that time, the two local companies were still comfortably ahead of Amazon. Since then, its market share gains have significantly accelerated.

In the quarter ended January, its volumes, or number of shipments, grew 150%. Snapdeal reported an increase of 90% in gross sales, including discounts and product returns, for the year ended March, and its growth dropped sharply in the second half. Flipkart’s monthly sales have remained stagnant since November, Mint reported on 14 April. Flipkart declines to disclose its numbers, but says it’s seen “healthy sales growth".

The ELI survey unearthed interesting insights: Amazon has a superior browsing experience, better product assortment and a speedier delivery network than Flipkart but it lags its rival in offering low prices; Flipkart, which was once known for its fast and reliable product delivery, needs to significantly improve its logistics efficiency and speed, the survey found.

US-based Amazon also owns 21 warehouses across the country and has provided technology tools and processes for 50 others owned by its sellers. In comparison, Flipkart owns 17, while Snapdeal doesn’t own any.

In July 2014, Amazon.com Inc. CEO Jeff Bezos promised to invest as much as $2 billion in India over the next few years. Since then, Amazon Seller Services Pvt. Ltd (Amazon India) has already received more than ₹ 12,000 crore to splurge on discounts, advertising, hiring and other things, show documents with the Registrar of Companies. This is apart from the firm’s cash infusions in its logistics unit Amazon Transportation Services Pvt. Ltd and Cloudtail India Pvt. Ltd, the largest seller on its platform.

When Bezos made the announcement, it was seen as an open challenge to Flipkart, which had announced just a day earlier that it raised $1 billion from Tiger Global, Naspers and other investors. Analysts and investors in India believed Amazon would take a few years to run through that money, but the company shocked the market by burning through the cash in less than two years.

Earlier this month, Amazon said it will invest an additional $3 billion in India, piling pressure Flipkart and Snapdeal to keep raising fresh funds. On the other hand, investors at Flipkart and Snapdeal started pulling back late last year. Stung by the massive losses at these two firms and by the rapid expansion of Amazon, both existing and potential new investors have altered their rosy outlook on the two largest Indian e-commerce start-ups. Both are struggling to raise fresh funds at their preferred valuations, Mint reported on 14 April.

As far as Paytm and Shopclues are concerned, neither of them are known for offering a great customer experience or having shining brands. Their strengths lie in offering lucrative prices and in catering to customers in tier-II cities, the survey found.

A Snapdeal spokesperson said ELI did not reflect the depth and span of the e-commerce market. “To consider mobiles and large electronic goods as an indicator of the entire e-commerce market is both incorrect and inadequate. Also, the use of ‘awareness & recall’ as a metric for ‘trust’ ignores more relevant criteria like consideration and preference. The model is too simplistic and does not do justice—either to the players or to the industry," the spokesperson said.

In late March, the government announced new foreign direct investment (FDI) rules, which banned marketplaces from influencing product prices and capping sales of a single merchant at 25% of a marketplace’s overall sales. E-commerce firms had temporarily put sales events on hold after the regulations, though they resumed offering deep discounts this month.

The next ELI is likely to reflect the impact of the FDI regulations on the performance of e-commerce companies.