The high-end category is the future for watches in India

The high-end category is the future for watches in India

New Delhi: President and chief executive officer of Timex Group BV—one of the world’s largest watch makers—Hans-Kristian Hoejsgaard, visits India every four months to attend meetings of Timex’s Indian subsidiary, Timex Group India Ltd, which he chairs. He said his visits are growing more frequent as business is growing in the country.

India is a priority market for the $800 million (Rs3,880 crore) company because its unit here has been growing at 12% a year, compared with below 5% at the parent firm.

Hoejsgaard said his firm is expanding its business in the country and plans to operate 100 stores in the next two-three years and a second factory in Noida on the outskirts of New Delhi. The company, which currently has 62 stores across India and distributes brands such as Timex, Versace, Valentino, Salvatore Ferragamo, Guess, Gc, Versus, Nautica and Opex, plans to add three more brands—Vincent Berard, TX and Marc Ecko—which together comprise its entire global portfolio. Hoejsgaard discussed in an interview the crucial role India will play for the Timex Group in the times to come. Edited excerpts: 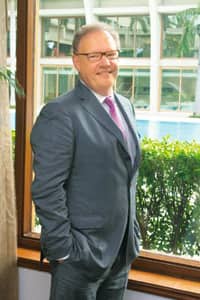 Reaping benefits: Timex Group chief Hans-Kristian Hoejsgaard says India is the second most important market for the firm after the US. Rajkumar / Mint

We have been around for nearly 30 years, but it has been the last 10 years where the growth has been excellent for the group. Today, India is the second most important market for us after the United States because it is one of the three markets around the world that is still growing.

We have an established presence in India being one of the first foreign brands to enter the country because in the 1980s-90s, when most of the companies rushed into China, we rushed into India and now everyone else is playing catch-up with us. India accounts for 5% of our total revenues and we expect this figure to double to 10% in the next three-five years. Now the Indian economy is predicted to grow at 6% and we are growing here at around 12% so we are obviously very optimistic about the future and plan to take full advantage of the economic environment in India.

What are your plans for India?

We have 12 brands in our global portfolio, nine of which are already in India. We plan to bring the remaining brands to the country by next year. In terms of our presence in the country, we currently have 62 stores in India and are adding a net of about 10 this year and the next milestone is to cross 100 stores in the coming 24-36 months. We are encouraged by the re-elected government which uncomplicates much of our business plans, so some of our plans may actually happen earlier than we think today.

Where investments are concerned, in the last 20 years this has been the market after the US and France that has received investments in double-digit millions of dollars and, going forward, our investments are only going to get bigger as we continue to expand.

In September, we are opening a factory in Noida, the second after the existing factory in Baddi in Himachal Pradesh. Also, the fact that we are bringing in all our group’s brands mean there will be a lot of marketing around them. Our efforts will be backed very strongly by television, print, online and PR (public relations) events. We have signed up Brett Lee as our brand ambassador and we know this will work well for India, being a cricket-loving nation.

Also, in India we are traditionally known as an affordable brand but with the new brands we are bringing in, our brand focus and positioning will shift to the high-end category of watches in the Rs10,000 and above range, as it will help us to build a different brand appeal in the country. We believe this high-end category is the future for watches in India, and in no time this market will explode. This is not discounting the Rs3,000-5,000 range because we are well aware that this is the most important market to drive the growth. We are also actively looking for acquisitions to accelerate growth.

Are there enough takers for high-end luxury watches in India, given that most luxury retail outlets remain relatively empty?

I come to India to get energized—the pace of things may have gotten slower in India than two years ago, but at least we’re growing here. It’s fascinating but there are some parts in India that are absolutely untouched by recession and these we identify as pockets for growth. Consumer behaviour in India compared to the West is also quite different. There consumers are trading down while here they are trading up, so there are takers for luxury goods but for the market to completely take off, we just have to stay the course till the economy picks up again. But with the government and RBI (Reserve Bank of India) projecting a 6% growth, we will be riding on the back of that. In the US, a 6% economic growth would sound like big news.

What would you identify as some challenges for your company?

High tariffs and import duty is definitely one of the biggest challenges we face. If we compare the prices of our watches sold here to Dubai and Singapore, there is a 25-40% difference in price depending on the brand and this could dampen consumption because the consumers who can afford these watches can also afford to buy it in any other country for a better price.

Secondly, retail space in india is not enough. For luxury retail, it’s all about the environment and experience and there are not enough of malls such as the Emporio in New Delhi. But we have been through the same challenges in China and today the country is the third or fourth largest luxury market, so things will level out in India, too, because there is more potential here because even in India’s culture there is a tradition of luxury with all the gold and gift-giving that people indulge in.

With the advent of mobile phone, where the time is easily available, has the functionality of watches reduced?

This (mobile phones) is the biggest strategic problem to the watch industry. People do not feel the need to wear watches to read the time because it is available on their mobile phones or other gadgets that people carry around. So we want to take watches beyond time-keeping and redefine a watch as a fashion accessory, which is another reason for the eventual shift to the high-end positioning we have undertaken.

You see, there are three fundamental reasons why people wear a watch nowadays: One is as a fashion accessory or a personal adornment, and if you see some of these watches, they are so full of jewellery that you can barely see the time on it.

The second is men, who are usually fascinated by the intricacies of mechanical movement of watches, and third, watches being used in sports and outdoor area. These are called performance watches and are usually technologically programmed to read the heart rate, etc.

But this trend has not completely caught on in India yet. Here watches are still very much a part of everyday dressing and for men, the only accessory or jewellery. But in no time, consumer behaviour towards watches will change in India, too. And in the meantime, we would have figured out how to appeal differently.