Despite reporting weak earnings in a quarter that generally sees more business for IT firms, Infosys rewarded shareholders with a 1:1 bonus issue

Bengaluru: Infosys Ltd reported weak first-quarter earnings on Friday, as both revenue and profits were lower than analysts’ expectations, marking a slow start to the financial year even as the company jettisoned its practice of giving a full-year dollar revenue guidance.

However, despite reporting weak earnings in a quarter that generally sees more business for IT firms, Infosys rewarded shareholders with a 1:1 bonus issue. The board also inducted Mike Gibbs, chief information officer at oil giant BP Plc, as an independent director for three years, taking the total board strength to nine, including six independent directors. 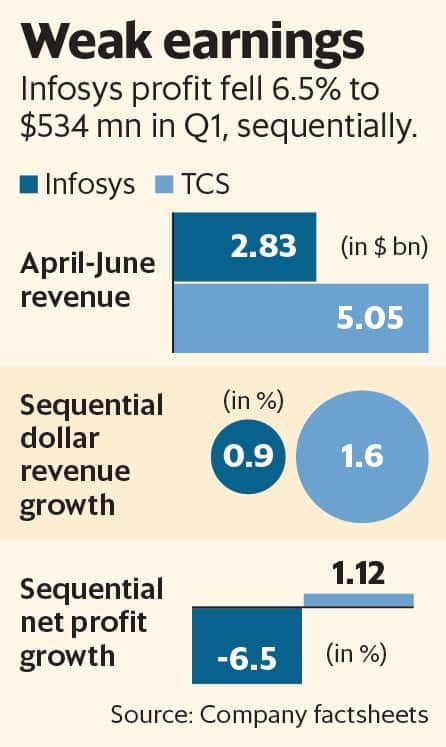 Infosys’s operating margin declined 100 basis points to 23.7% at the end of the June quarter from 24.7% in the January-March period.

Worryingly for the firm, 11 months after co-founder Nandan Nilekani returned as its non-executive chairman, and six months after it appointed Salil Parekh as chief executive officer, Infosys’s attrition rate continues to move northwards, with attrition in parent IT services business rising to 20.6% from 16.6% at the end of March. Including Infosys’s subsidiaries, the attrition rate is 23%. Infosys saw a 2% sequential constant currency growth in business from clients in the US, which accounts for 60% of total revenue. In the industry segment, the company saw a de-growth in business from customers in the banking and financial services sector, which accounts for 31.8% of revenue.

Infosys’s performance in the first quarter pales before that of its larger rival Tata Consultancy Services Ltd (TCS), which declared a strong first quarter earnings on Tuesday. Mumbai-based TCS, despite doing 44% more business in the first quarter than Infosys, reported a 4.1% sequential constant currency growth at 25% operating margins.

Infosys maintained its constant currency guidance of 6-8%, but declined to share the company’s latest projections on actual dollar revenue growth for FY19.

For now, Infosys has retained its full-year growth outlook of 6-8% in constant currency terms, again far less than TCS, which again reaffirmed that the company will clock a double-digit growth in the current financial year.

“We think we had a solid quarter in Q1 of fiscal 19. We had 6% growth overall in constant currency terms. We had 25% growth in terms of our digital business. These are good numbers. We had 23.7% operating margins," said CEO Parekh.

“In fact, we’ve now put in place a very clear strategy. We are starting to execute on our three-year transformation plan…So, to me, it was a solid quarter and the start of the execution of our strategy. From my perspective…I would call that a solid quarter."

“1Q19 revenues marginally lower than Street estimates but better than feared," Morgan Stanley analysts Parag Gupta and Gaurav Rateria wrote in a note to investors after Infosys reported its earnings.