Paris: French retailer Carrefour is on the hunt for a new chief executive, according to a source close to the situation, a revelation that could further weaken the position of incumbent Lars Olofsson after a series of profit warnings. 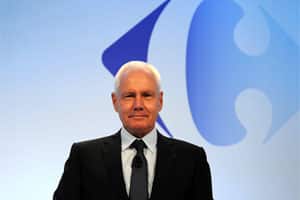 The source told Reuters that experienced retail executive Georges Plassat had already been offered Olofsson’s job as part of the search, but turned down the proposal earlier this month.

“He (Plassat) was offered the job and he said ‘no´. This was in November," the source said, adding: “There is still no candidate to succeed Olofsson at this time."

Pressure has been building on Olofsson after repeated profit warnings, management defections and strategic u-turns over the past year.

Reuters reported earlier this month that Olofsson was on borrowed time and that the group’s top shareholder Blue Capital, an alliance between France’s richest man Bernard Arnault and US private equity colony Capital, might get rid of him soon, particularly if he failed to deliver on his ambitious project to revamp the group’s European hypermarkets.

Olofsson has promised an update on the hypermarket plan early next year, probably alongside fourth-quarter sales figures on 12 January or annual results in February or March.

“Following recurring rumours about the potential replacement of Carrefour’s CEO, the board of directors of the company formally denies all information published in the press on that subject," Carrefour said in a statement on Friday.

It issued the statement after Le Figaro reported that Colony Capital and Groupe Arnault had resolved to get rid of Olofsson and saw Plassat as a possible successor.

Colony Capital, Groupe Arnault and Plassat could not be immediately reached for comment.

Plassat is a former boss of French rival Casino who has also worked at Carrefour’s Spanish business and more recently led a turnaround of shoe and clothing group Vivarte under private equity ownership.

Most analysts say Carrefour needs a genuine retailer to turn it around and restore employee morale and investor confidence.

Analysts have said that former finance chief and emerging market boss Pierre Bouchut would also be a strong candidate for the job, along with the head of Europe, Thomas Huebner.

“We would consider Georges Plassat to be a suitable CEO," Nomura analysts have said, noting his experience of the food retail sector, his track record in restructuring, his knowledge of non-food retailing that could help Carrefour with a problem area and his experience working with majority shareholders.

“(However), we think it will take time to improve Carrefour’s performance and to convince investors to believe in another recovery story," they added.