Mumbai: After slashing the estimated proven and probable gas reserves from the D6 reservoir in India’s Krishna-Godavari basin—operated by Reliance Industries Ltd (RIL)—Niko Resources Ltd, the Canadian firm that holds a 10% stake in the asset, has recognized an impairment of $133 million in D6’s value on its books. 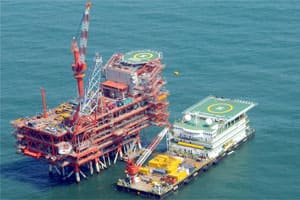 “As a result of reduced reserves volumes assigned to the D6 block, the company recognized a $133 million impairment related to the company’s producing asset in the D6 block in India for the year ended 31 March 2012," Niko said in its report issued on 27 June.

The offshore D6 block, touted to be India’s largest find till date, has been faced with declining gas production since September 2010. Gas production, which ought to have reached 80 million standard cu. m per day (mscmd), has fallen progressively and dipped to 31.33 mscmd this month. RIL holds a 60% stake in the asset, London-based BP Plc holds 30%, and the remaining is with Niko.

Last week, the Canadian energy firm had slashed proven and probable gas reserves from D6 by 78.55% to 1.93 trillion cu. ft (tcf) from the earlier estimate of 9 tcf.

In its 20 June reserves and contingent resources update, Niko said, “The reason for the decline in reserves referred to above relates to the D6 block. Proved plus probable reserves at D6 as at March 31, 2012, have reduced to 193 bcfe (billion cu. ft equivalent of natural gas), but it is important to recognize that coincident with the reduced reserves, there is approximately a $700 million reduction in future capital."

BP, which in August 2011 picked up a 30% stake in 21 oil and gas blocks operated by RIL by paying $7.2 billion, had recognized a similar reduction of $785 million in the net fair value of the assets and liabilities acquired through its partnership with RIL.

The Mukesh Ambani-led oil-to-yarn and retail conglomerate itself had cut its proven gas reserves by 6.63% of proven reserves at the beginning of fiscal 2012, according to its latest annual report, mostly on account of D6.

The disparity in the cuts effected by RIL and Niko in their estimated gas reserves was due to the different methods of computation used by the two firms and the different country laws governing them. Niko cannot count the so-called R-series and other marginal gas fields of the D6 block as reserves since the Indian government is yet to approve the development plan for them. RIL, however, counts them in its estimated gas portfolio.

Reflecting on the potential of the R-series and other marginal fields, Edward S. Sampson, Niko’s president and chief executive, said in his message to shareholders that reserves from D6 “are expected to more than double later this year when development plans are approved for existing discoveries", which is when Niko can count them as reserves.

RIL and its partners are working on an integrated field development plan for D6, with an envisaged investment of $4 billion in order to enhance production, which is expected to be submitted to the government in the last quarter of calendar year 2012.

Niko also said in its annual report that it planned to spend around $50 million towards development costs at D6 in fiscal 2013, double of what it had spent last year. “The development spending relates to the D6 block in India where $16 million is planned for two (well) recompletions at MA (another block within D6)," the report said. “A further $12 billion is projected to tie-in an additional well at MA. The remaining development capital relates to water handling and compression."

Based on Niko’s projected spend at D6 and its 10% stake in the asset, a back-of-the-envelope calculation shows that the developmental cost estimated for D6 in 2013 is $500 million, with RIL’s share being $300 million (having a 60% equity).

An email sent to RIL did not elicit a response till press time.