Pune: India’s not a nation of wine drinkers by any stretch of the imagination. The country’s per-head wine consumption is, for instance, a laughable four teaspoonfuls. But given that it was just one teaspoonful 15 years ago and that there are 1.2 billion people in this country, it all adds up to a fairly respectable number of bottles. The industry is trying to make sure that it takes a lot less than a decade and a half to rise another fourfold.

The country’s wine industry—still recovering from the economic slowdown of 2008 and the terror attack on Mumbai that November, just ahead of the festive season—is striking out boldly rather than waiting for a long-sought government rescue. 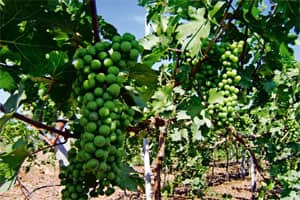 Changing practices: A vineyard in Bagalkot, north Karnataka. Sula Vineyards, which has an estimated 65-70% share of the country’s domestic production, is banking on contract manufacturing for growth.

Chief executive Rajeev Samant is confident that such contract manufacturing is the way to grow. “We source 50% of our value wines from other wineries and our choices support them. Sub-contracting is the best way to survive and we are at the forefront of this model," he said. To promote the concept, Sula announced a sharp increase of Rs5-7 per kg for its contract grape growers next year—its first hike in three years.

India’s wine industry is still a relative fledgling at a little over 30 years old. Nashik, about 200km north-east of Mumbai, is India’s wine capital with nearly 90% of the country’s 80-odd wineries located there. But some 35 wineries in the region are struggling financially, and the two industry associations—the All India Wine Producers Association (AIWPA) and the government-supported Indian Grape Processing Board, or IGPB—have been lobbying for a government bailout the past couple of years.

“In the first decade, there were a lot of ups and downs. We made only still wines, simple reds and whites. In the second decade, we are looking at quality wine production and stability and want to introduce quality standards, global practices, target different price and market segments," said Jagdish Holkar, president of AIWPA and chairman of IGPB.

“We expect the announcement of a Rs50 crore interest subvention package in a fortnight’s time. The total restructuring package of nearly Rs160 crore needs some final approvals. This will help in revival of wineries, since the market is growing at a healthy 25%," said Holkar, also the chairman of Flamingo Wines Pvt. Ltd.

“In Zampa, we were held back by a lack of adequate funds to build brands. Now, with a Dubai-based group of high networth individuals, private equity investor R. Viswanathan in his personal capacity and Reliance Capital investing in this venture, we have the means to beef up our sales team," said Roy, director and partner at Grover Zampa.

Vinsura Vineyards, too, decided to bail itself out, restructuring its business by handing off its marketing, sales and distribution activities to the Mumbai-based Grape Valley Marketing Solutions Pvt. Ltd.

“We will concentrate on making the wines and leave the sales, marketing and distribution to experts in that field," Nitin Desai, chairman and managing director, said.

The nine-year-old Vinsura Vineyards was set up, like a majority of its neighbours, by farmers with some spare funds. However, lacking sophistication in areas such as marketing and distribution, Vinsura fell on hard times and two years ago, Desai and his partners took it over. That restructured the manufacturing but even they could not handle the marketing and distribution.

“We will sell to Grape Valley at a fixed rate while they will sell to the distribution channel. We believe this will strengthen industry because distributors take advantage of wineries, demanding discounts of 50-60%. We entered into this arrangement from 1 April," Desai said.

Another advantage of creating a separate arm for distribution and sales is that the wineries can claim value-added tax, or VAT, rebates from the state government. “This is an additional revenue stream and some of the strongest players in the Indian wine market benefit hugely from the VAT refund, since they have this structure in place," Desai said.

“We did not wait for the (government) package. Instead, we restructured our debt with banks and began addressing the overseas markets. Now, if we export two containers every month we meet our loan repayment targets," Dhuru said. “China has a huge appetite and can alone take a couple of containers a month but we plan on exporting a container to Hong Kong-Taiwan-China and another to the West."

Dhuru’s winery is also installing a wine-tasting room to add to its revenue. “Our wine tasting room will be ready by October-November. Wine tourism is a huge opportunity but for us, that means an investment of roughly 2-2.5 crore. We can’t do that just now so we are setting up a tasting room, which will complement the rooms and swimming pool we have built," he said.

“The picture ahead for the wine industry is very rosy. The troubles the industry faced were inevitable, given that there was no quality product leading to large quantities of wine lying unsold in tanks at wineries. But those who concentrated on quality had no such problems," said Samant of Sula, adding that a significant portion of the unsold quantities, estimated last year at 20 million litres, were with Chateau Indage Ltd, India’s oldest winery.

Chateau Indage is struggling with financial difficulties, and has large quantities of unsold wine in its tanks. Company officials could not be reached for comment on the phone.

Holkar agreed with Samant. “There were about 20 million litres in stock but half of that has been sold. The balance is lying in oak barrels, etc., for value addition," Holkar said. One lesson learnt is that most wineries now crush only as much as they can sell.

Vikram Achanta, co-founder and chief executive of the Delhi-based Tulleeho, a beverage education and training firm, was a little sceptical about hiving off critical activities like sales, marketing and distribution to others. “An asset-light model of contract manufacturing seems to be successful but I am not so sure about separating the marketing arm, etc. I think it is risky to outsource the last mile to someone else," Achanta said.