New Delhi: The alliance between French car maker Renault SA and Japanese auto firm Nissan Motor Co. will bring its range of “zero emission" electric vehicles to India if the Union and state governments offer fiscal incentives and create the infrastructure to run them.

Renault-Nissan, which in 2012 starts commercial production of four electric cars running on lithium-ion batteries, has already signed deals with 34 governments across the world that have offered it incentives to manufacture electric cars. These include countries such as Israel, Denmark and Portugal. 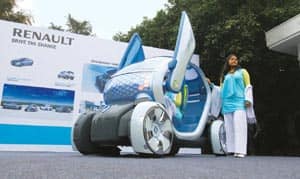 The absence of infrastructure such as battery charging stations and the relatively high cost of the vehicles in a price-sensitive country have limited the growth of the Indian market for electric vehicles. Nearly 100,000 electric vehicles are expected to be plying on Indian roads at the end of this fiscal, up from 85,000 last year.

Still, manufacturers are counting on increasing environmental and energy concerns to power the market’s growth.

Renault-Nissan will be displaying one of its electric concept cars called the Twizy ZE Concept, a city two-seater, at the Delhi Auto Expo that starts on Tuesday. The car was unveiled on Monday at the residence of Delhi chief minister Sheila Dikshit, who said the Delhi government was willing to give Renault-Nissan the support necessary to help launch electric cars.

Shiro Nakamura, senior vice-president and chief creative officer for design at Nissan, said Renault-Nissan was bullish on the prospects of launching its electric cars in India. “We aim to be the market leader in the electric cars segment, and India is an important market for us."

According to Sinharoy, Renault will try and price some of its electric cars at par with petrol and diesel versions of the same models.