Indian carriers have been under financial strain with at least $1 billion (about Rs4,800 crore) in losses in the fiscal year ended March, resulting in defaults on aircraft payments. Simultaneously, the global economic recession has meant that lessors suffering a credit crunch are pushing hard to extract payments. 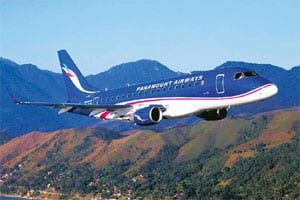 Turbulent times: A Paramount Airways aircraft. Indian carriers have been under financial strain with at least $1 billion in losses in the fiscal year ended March, resulting in defaults on aircraft payments.

In a letter dated 25 September to Paramount and the Directorate General of Civil Aviation (DGCA), Gecas says the airline “has failed to remedy the events of default referred in the notice and as at the date of this notice there still remains $215,540.18" in dues.

Paramount has informed DGCA that it has already paid 65% of the sum and has a deposit of about $15 million with Gecas, including a $5 million safety deposit and the balance towards maintenance reserve.

“As per the contract, Paramount is entitled to refund to the tune of $1.27 million," it said.

Mint has previewed copies of both the letters.

A Paramount official said on condition of anonymity that the airline has asked Gecas “to offset the rentals against the reserves". He added that the matter is being resolved through talks.

Spokespersons for both Paramount and GE declined comments.

Paramount, which has a 2% share in the domestic market, runs a fleet of five leased Embraer jets. It has kept its operations limited and manageable so far, unlike other carriers that have outpaced the local industry’s growth.

Gecas has sought back three of these aircraft, leased as part of a 29 July 2005 agreement.

Gecas said in its letter to DGCA that it has the option to terminate the leases if Paramount continued to default on payments and operate the aircraft in breach of its grounding notice dated 24 September.

Kapil Kaul, chief executive, India, Centre for Asia Pacific Aviation, said issues with lessors are the outcome of the overall squeeze on the sector. “When an airline goes through turmoil, everyone around them gets massively affected. The last thing to be affected is leasing companies amongst vendors."

Kaul added that large leasing firms usually start the recovery process after one or two deferments, while smaller firms tend to be more understanding, depending on the airline’s track record and the relationship between the two.