ICICI’s new chairman Girish Chaturvedi has his task cut out

Mumbai/Bengaluru: ICICI Bank on Friday appointed former bureaucrat Girish Chandra Chaturvedi as non-executive part-time chairman of India’s second-largest private bank, whose board has been criticized for letting a crisis at the bank fester.

The bank said Chaturvedi’s appointment will be effective 1 July, or the date of receipt of Reserve Bank of India (RBI) approval, whichever is later, as current chairman M.K. Sharma’s term ends on 30 June. 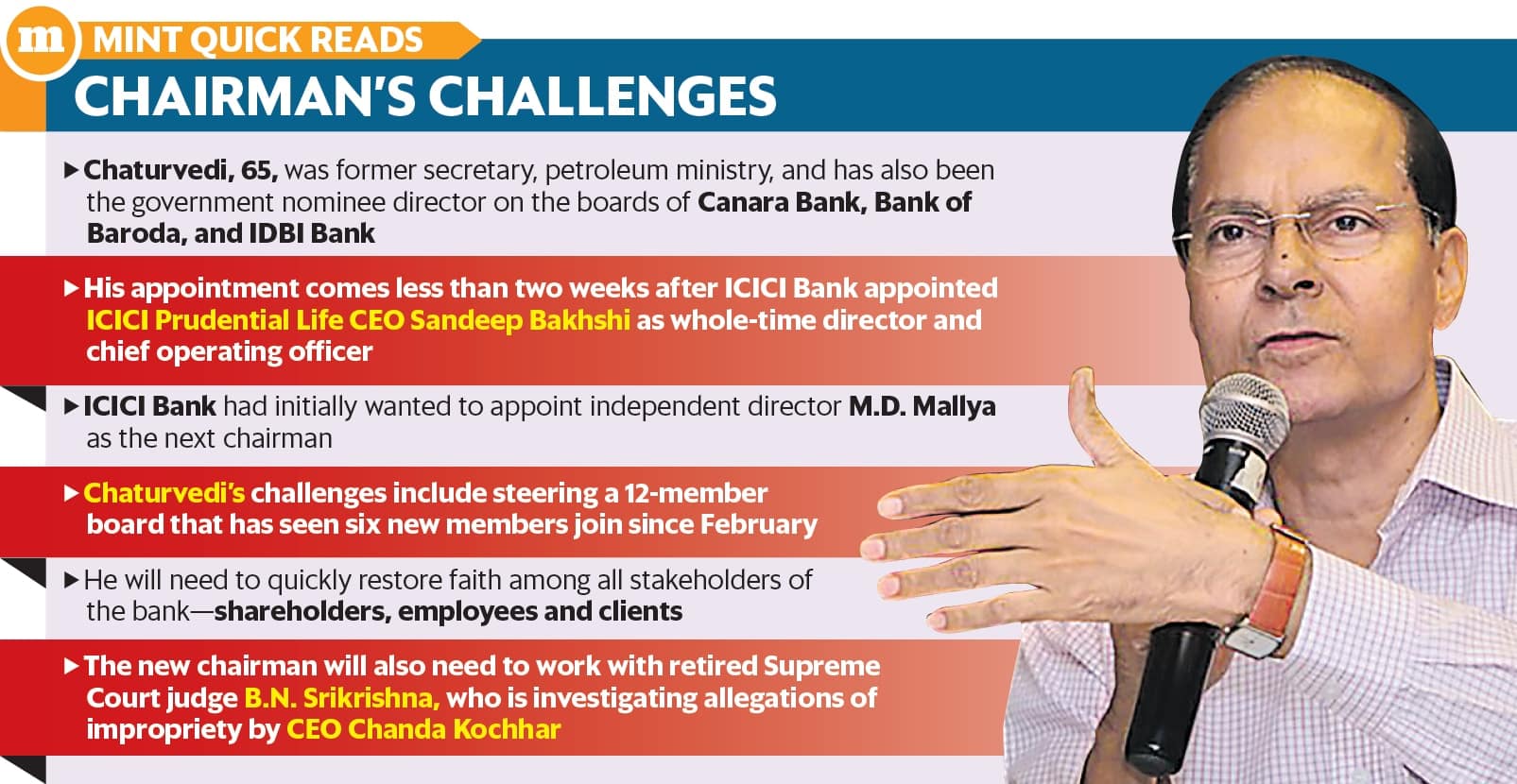 ICICI Bank initially wanted to appoint independent director M.D. Mallya as the next chairman and had even sought RBI’s approval. However, the approval from the banking regulator appears to have run into a hurdle as Mallya has been facing health issues over the last few weeks, according to an executive familiar with the development.

Chaturvedi’s appointment comes less than two weeks after the bank entrusted a leader to oversee all of its business operations.

Chaturvedi, who has been appointed for a three-year term, faces three main challenges.

First, ICICI Bank faces a reputational risk on account of charges of skulduggery against Kochhar, and the chairman needs to quickly address investor concerns as the bank battles to retain the faith of foreign portfolio investors.

Goldman Sachs has removed the stock from its conviction list on continued uncertainty around its CEO and the lack of clarity around the succession planning for the CEO role.

ICICI Bank’s shares have fallen 12.26% so far this year, underperforming the Sensex and BSE Bankex, which gained 4% and 1.36%, respectively.

ICICI Bank remains confident about its decision to have Chaturvedi helm the board.

“The board is extremely pleased with this development and believes that Mr. Chaturvedi will provide maturity and sagacity to the deliberations of the board. This would also ensure a seamless and smooth transition of leadership at the board and would address stakeholder concerns in this behalf," said ICICI Bank.

Second, the ICICI board has instituted an independent probe by retired Supreme Court judge B.N. Srikrishna, although for now, the board has not shared any details, including the terms of reference and the time period for the probe’s completion. The challenge for Chaturvedi will lie in how he deals with the findings of the committee, especially those related to alleged lapses in corporate governance, which is also being probed by market regulator Sebi.

Finally, from 1 July, Chaturvedi will head a 12-member board that is markedly different than the one in January, as half of the board members were not with the bank at the start of the year. Since January, three independent directors, Homi Khusrokhan, Tushaar Shah and V. Sridar retired after completing their tenure of eight years, as prescribed under the Banking Regulation Act, and were replaced by Uday Chitale, Radhakrishnan Nair and Mallya.

In April, the government replaced its nominee, Amit Agarwal, with Lok Ranjan without giving a reason for this change. Earlier this month, ICICI Bank appointed N.S. Kannan as the new CEO of ICICI Prudential Life Insurance, the reason he is not on the board.

Chaturvedi, who served as an IAS officer from the 1977 batch and retired as oil secretary in January 2013, will need to quickly get his act together and lead an already reconstituted board. He has the experience, having served as government nominee director on the boards of Canara Bank, Bank of Baroda, and IDBI Bank Ltd and also on the boards of insurance firms such as New India Assurance Co. Ltd and United India Insurance Co. Ltd.