Flipkart, Myntra and Paytm, however, reduced their expenditure on TV ads in the three months ended September

Sixty-seven per cent of advertising costs incurred by start-ups were on prime-time spots. Forty-one per cent of the spending was for television commercials on non-fiction channels, the data showed. Flipkart, Myntra and Paytm, however, reduced their TV ad spending in the quarter, according to the TAM data.

“Number of companies which are less than five years old and advertising on TV has doubled in 2015 (in 9 months till September) compared to whole of 2014," said K.A. Srinivasan, co-founder of Amagi Media Labs Pvt. Ltd, a TV media company that provides cloud-enabled TV broadcasting services.

“Clearly, TV provides huge reach in one go and cost per reach is also the lowest among all media. Increasingly, we are seeing pressure from investors and board as well to advertise on TV for rapid scaling," he added. 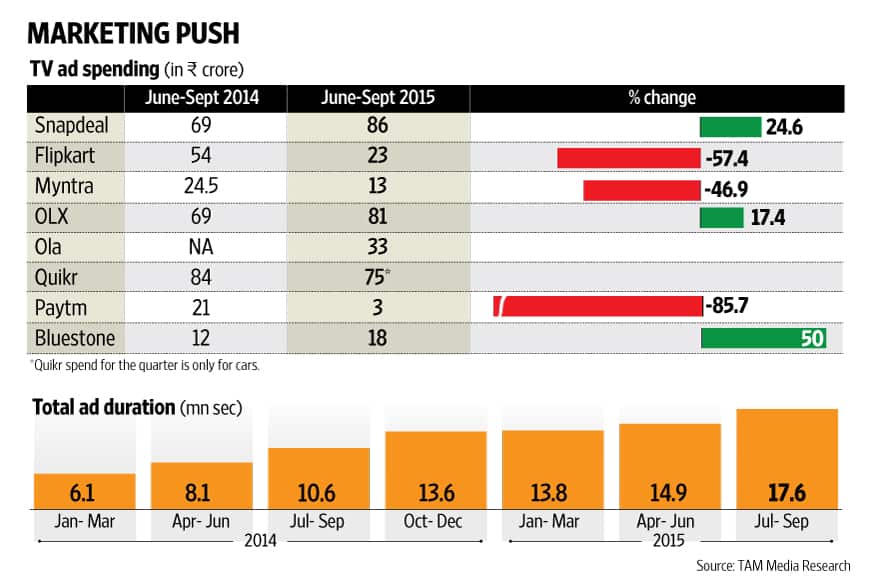 Ad durations have shot up for these companies by 725% from 400,000 seconds in January 2014 to 3.3 million seconds in September this year, according to data available for start-ups that were founded in the past five years.

At 67%, start-ups are spending a greater share of their advertising budgets on prime-time commercials relative to traditional packaged consumer goods companies, which devoted 48% of their promotional budget to TV commercials aired during peak viewing hours.

“We have historically spent money mostly on Facebook to reach our target women audience. TV for us is a new channel," said Suchi Mukherjee, co-founder of online fashion store Limeroad, run by A.M. Marketplaces Pvt. Ltd.

“We chose it over others given not only the reach but also that it is a highly visual platform much like our platform. Whatever works, we will double down and spend more. Whatever doesn’t, we will pull back and re-evaluate," she said.

The new entrants for this year include firms such as Limeroad, Craftsvilla Handicrafts Pvt Ltd. (it launched its TV ads in late September), and hyperlocal delivery company Grofers (Locodel Solutions Pvt. Ltd), among others.

“We use digital ads as other mediums apart from print and TV. We have allocated 50% for digital, 40% for TV and 10% for print. The increase in spend is more than 10 times over last year," said Manoj Gupta, co-founder of Craftsvilla.

Spending on advertising and marketing is a function of the funding received by these companies. In 2015, Limeroad, Grofers and Craftsvilla have collectively raised $93 million in funding and spent ₹ 28.5 crore in advertising between June and September, according to the TAM data.