Mumbai: TPG Growth, the growth-capital fund of US private equity firm TPG, is set to sell a 20% stake in Bengaluru-based surgical equipment maker Sutures India Pvt. Ltd in a deal worth $100 million (about Rs650 crore), according to two people aware of the development.

TPG Growth, which owns around 73% in Sutures India, has started initial discussions with US-based private equity funds such as Carlyle and Advent International, said one of the people, both of whom declined to be named. Investment bank Goldman Sachs Group Inc. is advising TPG on the sale. 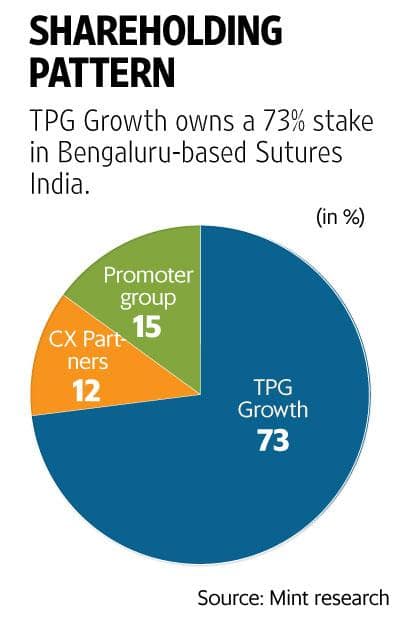 Besides TPG, domestic private equity fund CX Partners holds a 12% stake, while the rest is held by the promoters. It is not clear whether CX Partners will join TPG for a partial exit from the firm. In this round, Sutures will be valued at around $500 million.

TPG Growth invested in Sutures in 2013 by acquiring a 23% stake from CX Partners and the firm’s promoters for Rs145 crore. Over time, TPG raised its stake and now holds a majority in Sutures.

Sutures, which makes surgical and wound-closure products such as natural and synthetic, absorbable and non-absorbable sutures, surgical needles, staples, tapes and bone wax, competes with firms such as Smith and Nephew Plc, Ethicon Inc. and ConvaTec.

Sutures is planning an initial public offering (IPO) by 2018-end, said the second of the people cited earlier, adding that TPG can sell its remaining stake in the IPO for a complete exit. However, details of the company’s IPO plan could not be ascertained.

CX Partners has been looking for a complete exit from Sutures since last year. Last year, domestic private equity fund Kedaara Capital had emerged as the front-runner for acquiring CX Partners’ remaining stake in Sutures India, Mint had reported in April 2016. The deal did not go through. Besides Kedaara, Malaysian sovereign wealth fund Khazanah Nasional Bhd had evinced interest in Sutures India.

CX Partners had acquired a 37% stake in Sutures for about Rs200 crore in 2012 by buying out the entire stake held by India Life Sciences Fund.

Spokespersons for TPG, Carlyle and Goldman Sachs declined to comment. Emails sent to Sutures India, Advent and CX Partners were not answered.

Founded in 1992, Sutures exports products to 91 countries in Europe, South America, Africa and Asia. It also supplies to over 10,000 hospitals across India.

TPG Growth is an active investor in the Indian healthcare industry.

In July last year, TPG Growth acquired Bengaluru-based Rhea Healthcare Pvt. Ltd, which operates a network of mother and child care centres in India under the Motherhood brand for $33 million. In April 2016, TPG Growth had invested in Cancer Treatment Services International, a network of single-specialty facilities across India.

The healthcare delivery system in India requires an investment of around $245 billion, according to a PwC India January 2015 report, The Future of India: The Winning Leap. India needs to add 3.6 million beds, 3 million doctors and 6 million nurses over the next 20 years, the report said.